Where have all the hedgehogs gone? shutterstock Daniel Allen, Keele University

When the humble hedgehog was crowned “Britain’s national species” in a BBC Wildlife Magazine poll and “Britain’s favourite mammal” in a Royal Society of Biology poll, no doubt, sentimentalised memories of Beatrix Potter’s The Tale of Mrs Tiggy-Winkle, played a role in swaying public opinion.

Beatrix Potter managed to sprinkle some magic over the hedgehog, transforming it into the irresistible companion of our gardens.

But despite their popularity, hedgehogs are now something of a rare sight in British gardens – and are in fact disappearing at the same rate as tigers worldwide. Rural hedgehogs in the UK have halved in number since 2000, while urban hedgehogs have declined by a third. More widely, UK hedgehog numbers have dropped from an estimated 30m in the 1950s to under a million today.

So what’s to blame? We are. Well, the changing lifestyles and tastes of people, to be precise. Farming methods have changed dramatically over recent years – becoming increasingly intensive. This has led to the removal of many hedges, an important habitat for the British hedgehog. It has also had negative implications on their main diet of worms, beetles, slugs, caterpillars, earwigs and millipedes.

The country’s roads are also busier. Hedgehog road deaths are estimated to exceed 100,000 a year in Britain. Road networks also cut through habitats leaving hedgehogs isolated, while our gardens are increasingly becoming more humanised. Lawns have been turned into tarmac for cars, foliage has been torn out, decking added, garden borders peppered with slug pellets, and hedges replaced by impenetrable fences and walls. All of which mean that hedgehogs are not only losing their habitats, but also their chances of survival.

The plight is such that the British Hedgehog Preservation Society and People’s Trust for Endangered Species launched Hedgehog Street in 2011 to encourage people to champion the species and its habitat. 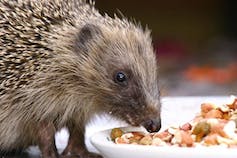 At the RHS Hampton Court Palace Flower Show in 2014, designer Tracy Foster made Hedgehog Street a reality, creating a summer garden to demonstrate “how neighbours can work together to help hedgehogs by providing routes through garden boundaries”. Sharing slogans such as “no one garden is enough” and “make a hole, make a difference”, the hedgehog haven won People’s Choice for Best Small Garden and the coveted RHS Gold medal. The first permanent Hedgehog Street garden was unveiled at RHS Harlow Carr, in North Yorkshire in April 2017. 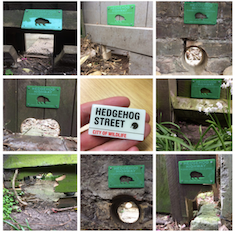 But as “no single garden can offer everything they need”, make “holes for hogs” a community thing. Connect with your neighbours and think of your garden as a hedgehog highway – square holes in fences and walls – 13cm wide to be exact – allow for their safe passage. These changes can be made straight away, but be careful not to disturb hidden hedgehogs, as they hibernate until spring.

As well as ensuring there is hedgehog access in your garden, there are a wide range of small steps you can take to help save hedgehog lives. Checking compost heaps before digging with a fork, and checking long grass before using strimmers or mowers will stop horrific injuries. Moving piles of rubbish to a new site before burning and checking bonfires before lighting, will prevent deaths by burning.

Keeping netting at a safe height will avoid tangling and starvation. Stopping (or reducing) the use of pesticides and slug pellets will stop (or reduce) poisoning. Providing an easy route out of ponds and pools will prevent drowning. And, responsibly disposing of litter will reduce hedgehogs getting in trapped in tins, rubber bands and McFlurry lids.

All of this is important, because the humble hedgehog is more fragile than its prickly exterior suggests. And if we want to continue experiencing their rustling and shuffling in the undergrowth, snuffles and snorts in the hedgerows, and foraging on the lawn before sunset, it is our responsibility to save them.