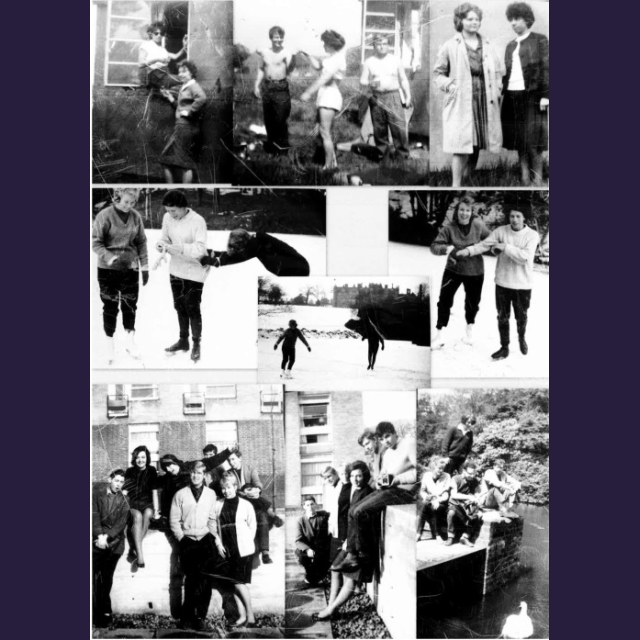 Living at Keele in the late 50s was the lap of luxury: never-before-experienced warmth and central heating; hot baths at any time of the day or night. Huge English (later also Continental) breakfasts and ample meals provided free twice a day in the refectories (except Sundays when we were compensated by heaps of tins of baked beans, tomatoes, ham etc.), and all lectures and on-campus activities within walking distance. The associations of the word 'Pioneer' with rugged hardship, sturdy individualism and self-sacrifice are quite inappropriate to the cushy reality. Derek Evans reminds me: the luxurious location of my life of plenty and ease during the first half of 1957 was Hut 8, a happy home for 4 Freshers and 3 senior citizens. Myself and Alan Matten were one end; Malcolm Kerr and Mike Pullen (both of Harrow Weald Grammar School who raised the tone by wearing smart Keele blazers with badges, ties and grey flannels 24/7) at the other; and, sandwiched between, 3 (to us) incredibly old and experienced finalists who referred to themselves - and were known to us - as Teddies II, III and IV. The world knew them as Dick Perkins (who got a First by working all night and sleeping all day), John Pierson (who spent much time in gentle domesticity with a nice, quiet girl from Lindsay Hall (whom I will not name lest this reach Wikileaks) and Derek Evans. Dark, broad, bespectacled and cheerful, Derek was the Alpha male of the hut whose daily haul of after lunch female students (many coming back for more) never ceased to amaze us former schoolboys. It was for the purpose of academic revision he said; a wholly credible explanation that we innocents never doubted until we peeped in his window one fine afternoon. He had two timeless LPs, 'Pal Joey' and 'Carmen Jones' both of which I grew to love, and still do. Life was wonderful and ended with a fine summer, exams, the voice of John Arlott commentating on England versus the West Indies and those little friends of mine, Ramadin and Valentine. It is embedded in the memory but was (as Burns had it) like a snowflake in the river, a moment glimpsed then gone forever. Whatever did happen to those golden Teddies?