This year has been unprecedented for so many reasons, and nobody could have predicted in January how different our lives would look as we reach the end of the year. But despite the turbulence and uncertainty that 2020 has brought, Keele research and expertise has continued to make global headlines throughout the year.

Academics from Keele shared their expert analysis this year on subjects including the coronavirus pandemic, national and international politics, the environment, human rights, and wider issues surrounding global health. Our experts have given over 70 TV interviews, almost 250 radio interviews, written 58 Conversation articles, and our research and expertise has been quoted in thousands of press stories, reaching more than one billion people across the world this year. Read on for our news highlights for 2020.

We kicked off the year by announcing the launch of the HyDeploy trial at Keele. The innovative trial received major coverage on BBC News on January 2nd, and was then featured on BBC Radio 4, BBC Midlands Today, BBC World Service, CNN International, The Guardian, and Forbes.

In January, Keele also welcomed a delegation from the Beijing Foreign Studies University to campus. Coverage of their visit and the innovative partnership was secured by the Communications Team in China Daily, which was then shared on their social media channels, reaching over 85 million people.

Other news highlights in January included the launch of the Start to Success mental health partnership, Keele being ranked in the global top 25 in sustainability world rankings, and the announcement of a £1.6m research project to trial the effectiveness of braces for knee pain. 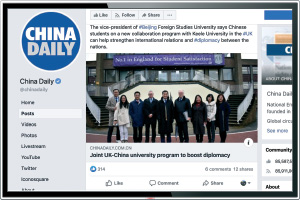 Keele’s pioneering research to reduce opioid prescriptions was featured in The Sunday Times this month: 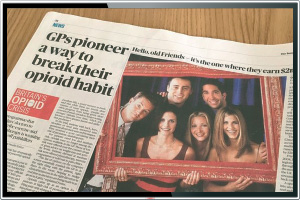 Research by Professor Chris Fogwill about ancient Antarctic ice which caused a dramatic sea level rise led to him being interviewed by The Boston Globe.

Dr Mark Eccleston-Turner was interviewed by CNN about the development of the coronavirus outbreak and he provided further expert commentary about quarantine rules in an article by The Guardian.

Dr Maria Flood’s Conversation article about the film Bombshell and its portrayal of the Me Too movement was republished by the Metro newspaper and Professor Dominic Janes’ shared his expertise with Reuters about Britain’s hidden LGBT+ history.

Keele’s dedication to sustainability and our zero net carbon mission was featured in a three-page spotlight in University Business.

As the UK headed into the first national lockdown of the Covid-19 pandemic, Dr Naomi Forrester-Soto carried out her first interview on Radio Stoke, a 45 minute Q&A session, and was also interviewed by Sky News, BBC Radio 5 Live, BBC News. Dr Mark Eccleston-Turner was interviewed on BBC News about the government’s approach to handling coronavirus.

Professor Ken Rotenberg’s expert commentary about why people were spreading misinformation during the pandemic was published in the UK, Indian and Spanish editions of Huffington Post and several international editions of Yahoo News.

The Communications Team also began their coverage of stories which highlighted the impact the Keele community was having to help the pandemic including, donating PPE from university laboratories to frontline NHS workers and student food donations to help community during the pandemic.

News highlights for March included research which found a link between osteoarthritis and an increased risk of premature death, Higher Horizons+ celebrating 100,000 interactions with young people, and the prestigious UN appointment of Professor Tomoya Obokata to help tackle modern slavery. 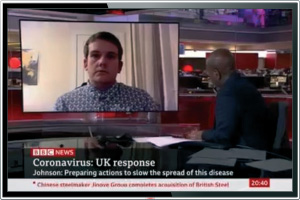 Keele academics shared their expertise with a range of national and international outlets in April including Professor Dawn Scott’s interview on BBC News about the impact the first lockdown had on Britain’s wildlife, Dr Panos Sousounis’ quote in China Daily about the impact of the pandemic on the tourism industry, and Professor Gillian Lancaster’s interview on BBC News about the first human trials of the Oxford Vaccine. 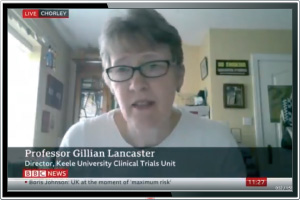 May saw the team secure coverage of Keele research in prestigious national outlets including Dr Helen Wells’ research about the impact of lockdown on commuters which featured on the front page of The Times - as well as in The Daily Express and on BBC Midlands Today, and Dr Ralf Gertisser’s research into a 60-million year old Scottish volcano which was also covered by The Times.

We started the first of The Knowledge Facebook live Q&A series with Dr Sharon George. Since May, our academics have taken to Facebook to share their expertise on a range of topics to entertain, educate, and inspire our current social media audiences who have been stuck at home this year. 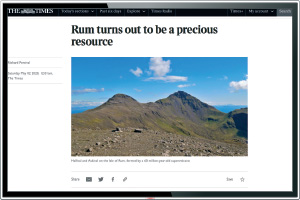 Professor Clifford Stott was interviewed on CNN, BBC News, The Guardian, IFL Science, Channel 4 News, and widely in the national press about the global Black Lives Matter protests. Professor Stott was also quote in The Telegraph about regional lockdowns and was featured in an episode of BBC Radio 4’s The Life Scientific.

Research led by Professor Lisa Dikomitis into the misdiagnosis of cluster headaches received national coverage in the Guardian and the Metro newspaper this month: 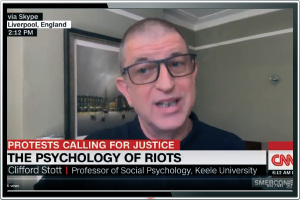 The Communications Team secured coverage for a study by MSc student Marty Parker which was covered in hundreds of outlets nationally after it was covered by PA media, including Sky News, the Daily Mail and The Times, reaching millions of people:

Keele research featured in The Times

A Conversation article about the study quickly became the website’s most read article of the month.

Research by Professor Toby Bruce into maize plants using wasps as ‘bodyguards’ against pests featured in the Daily Express, IFLScience, BBC Science Focus, and Professor Brian Doherty’s research into the demographics of Extinction Rebellion was widely featured in the press including New Scientist, The Times and Tatler Magazine.

The innovative HyDeploy project was featured by BBC News and Dr Naomi Forrester-Soto featured on the network’s flagship Newsnight programme, just four months after her first ever media interview: 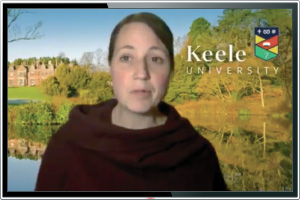 Following the killing of a popular singer in Ethiopia, which led to civil disorder in the country, Dr Awol Allo was quoted in the Guardian, Reuters, and the New York Times about the impact of the singers’ death on the wider Ethiopian political landscape.

We paid tribute to Audrey Newsome, the founder of Keele’s pioneering student counselling service, who sadly passed away this year, and also Tony Elliott, a Keele alumnus who founded the hugely successful TimeOut magazine brand in the 1960s.

As A-level results day arrived, Vice-Chancellor Professor Trevor McMillan was interviewed on BBC One’s News at Six, as well as on BBC Midlands Today, about Clearing 2020 and how Keele was preparing for September’s intake of students. 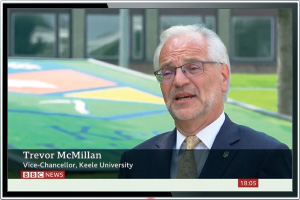 Dr Adam Moolna wrote for The Conversation and appeared on BBC Breakfast talking about a major oil spill in Mauritius, as well as being quoted by outlets including Reuters, the New York Times, and the Independent in the aftermath of the disaster. Dr Katie Maddock was interviewed by Sky News about hand sanitiser, with her comments being featured by Times Radio, MSN News and Yahoo News UK.

We published a story about the first findings from the REACT-2 study which Keele supported and were pleased to announce that the new Innovation Centre 7 building on the Keele University campus was one of 300 projects to receive funding from the government’s “Getting Building Fund”.

Keele was thrilled to be shortlisted for University of the Year in this year's Times Higher Education awards, and University Business featured Katie Laverty, Director of Student Services, in an article about helping students with their mental health, as well as showcasing how Keele has exceeded its own sustainability targets.

Dr Naomi Forrester-Soto continued her impressive run of media appearances speaking to BBC Radio 5 Live, Times Radio and BBC Radio 1 Newsbeat about the continued spread of Covid-19, as well as authoring an article for the Conversation which was republished by IFLScience.

Dr Jane Krishnadas spoke to the Guardian about the Keele-led CLOCK initiative, and how the staff and students involved are helping vulnerable people during the Covid-19 pandemic.

Professor Clifford Stott featured on the Guardian’s science podcast, in The Telegraph, and spoke to Sky News and BBC Radio 4. Dr Sharon George reached international audiences with interviews on Al Jazeera and TRT World, and Harry Upton, a Research Associate from the School of Law, spoke to the South China Morning Post about equitable vaccine distribution. 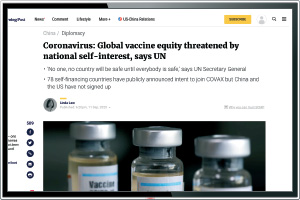 Research into Long Covid co-authored by Professor Carolyn Chew-Graham featured in over 200 local and national outlets including HuffPost UK, and reached an international audience by featuring in China Daily.

Dr Jonathan Parker was interviewed by LBC and BBC News about the US Presidential debates and the Communications Team secured an interview for Professor Mamas Mamas with the Daily Express about his research into the number of extra heart attack deaths that occurred during the Covid-19 pandemic.

In October, we published a story about a new Covid-19 testing site on Keele’s campus, which was installed as part of the National Testing Programme, as well as two exciting stories about the new Harper Keele Vet School, including the first cohort of students beginning their studies, and work officially getting underway on the vet school building on Keele’s campus. 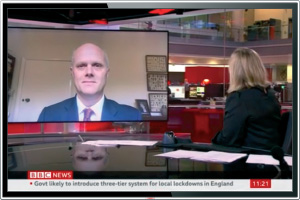 As the race for a Covid-19 vaccine continued, research by Dr Sue Sherman which looked at the expected uptake of a Covid-19 vaccine made national headlines after the Communications Team secured an exclusive interview for Dr Sherman with PA Media, which led to coverage by over 200 outlets including The Times, Telegraph, and the Daily Mail.

Additionally, Dr Mark Eccleston-Turner spoke to a number of outlets including BBC 5 Live, LBC and Sky News about the challenges of manufacturing and distributing a vaccine worldwide. He also co-wrote a piece for The Guardian about ensuring poorer countries have access to the vaccine.

Dr Jonathan Parker shared his expertise in US Politics with local, national and international media in the run up to and after the US Election in November. Among his media appearances this month were interviews with the international outlet, CGTN , and locally on BBC Radio Stoke.

Dr Deirdre McKay spoke to BBC News about the issue of electronic waste and its impact on the environment.

We were pleased to announce the launch of a major new research project led by Keele's Dr Mariangela Palladino which aims to improve the protection available for displaced people in North Africa. Professor Mark Ormerod featured in a piece by Times Higher Education about sustainability in universities, which described Keele as an “institution leading the way”. 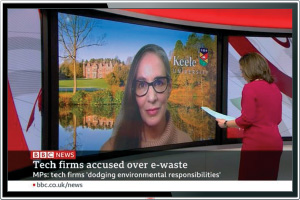 Ending our year in the news, Dr Mark Eccleston-Turner spoke to Al Jazeera about the Covid-19 vaccine and Professor Samir Dani was interviewed about the impact Brexit will have on supply chains.

Dr Eccleston-Turner also shared his expertise with national and international outlets about the Pfizer-BioNTech vaccine and was quoted in articles by The Telegraph, South China Morning Post, and POLITICOEurope.

Meanwhile, Dr Naomi Forrester-Soto was interviewed about the latest Covid-19 developments on BBC Radio 4' s prestigious World at One programme and also on Times Radio, Dr Sharon George was interviewed by BBC News about the impact of climate change on future winter weather patterns, Rachel Lee was interviewed by LBC, and Dr Gemma Loomes and Dr Philip Catney shared their verdict about the final push to secure a Brexit deal.

We also published stories on Keele’s latest research success including our academics being part of a €4.1m global research project looking into tendon repair treatment and technologies and funding to explore the use of environmental storytelling to reduce air pollution in India. 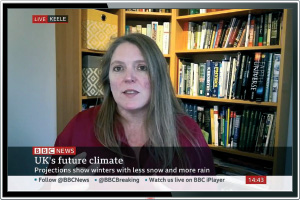