The Performance Philosophy movement (founded 2012) fuses artistic performance with philosophical thought, in acknowledgement that philosophy has both artistic and cognitive value – and that these are not antithetical. My contribution is the ‘Jazz-Philosophy Fusion’ style, to be employed throughout this lecture / performance. It will begin and end with my composition ‘I’m Gonna Tell You the Meaning of Life’, performed by a jazz quartet including pianist and philosopher Steve Tromans, who has recorded over one hundred albums and performed throughout the world. At the end of the final rendition, I will indeed ‘Tell You the Meaning of Life’; the fact that you may not agree is an important part of what makes it philosophy: that area of our culture which traditionally nurtures openmindedness. In the interim – in a lecture interspersed with music – I will argue that there is a severe lack of philosophy in our world, encouraged by materialism and anti-philosophical sentiment, which has created an irrational attitude to technological development. We live in a state of Technoparalysis, such that we see technology developing at an alarming rate in directions most of us fear, and yet regard it as if it were an asteroid hurtling towards our planet – we hope it will miss, but regard its trajectory as inevitable. The root of this phenomenon is the ancient metaphysic of materialism, which denies the existence of anything that cannot be studied with scientific methodology, thereby discouraging thought and denigrating issues that matter to people, such as the meaning of life. 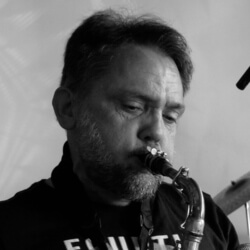 Professor James Tartaglia studied saxophone at Berklee College, USA (1992-3), philosophy at UCL (1993-2001), and was appointed lecturer at Keele in 2002, where he made a name as a scholar of Richard Rorty’s pragmatist philosophy. His main original work, Philosophy in a Meaningless Life, advocates a traditional, systematic approach to philosophy, centred on the question of the meaning of life, and addressed to people’s natural philosophical concerns; the forthcoming sequel, Gods and Titans, turns to questions about technological development. His ‘Great Philosophers’ edited collection series seeks to reconnect contemporary debates with their history. He originated the Jazz-Philosophy Fusion approach to performing philosophy.