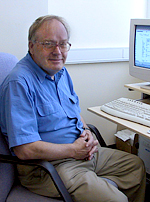 Title
Emeritus Professor of Organometallic Chemistry
Location
Lennard-Jones: 1.14
Contact me
Try my office or arrange an appointment by email