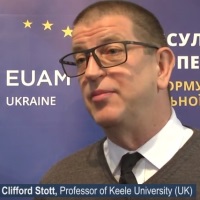 Keele University’s Professor Clifford Stott has helped launch a major police training programme in Ukraine that aims to underpin reforms to policing in the country.

Professor Stott, a crowd behavior expert and Director of Keele Policing Academic Collaboration (KPAC), has taken part in an EU Advisory Mission, as lead scientific consultant, to help train police commanders of public order units in Ukraine about best practice in the policing of crowds.

The training is part of a broader transformation project seeking to reform the police in Ukraine, moving them away from the regime protection to a more democratic approach, using a Swedish policing method.

Representing KPAC, Professor Stott was speaking on a platform alongside the Ukrainian Deputy Minister of the Interior and Deputy Head of the National Police along with senior police commanders from Sweden and Denmark.

Professor Stott said: “This is a very important programme for Ukraine and for Europe as it represents an attempt to democratise the police following a massacre at a protest in Maidan in 2014.

“It’s significant for Keele and KPAC to be involved in such important international developments, and that research being conducted at Keele is helping to construct democratic policing in Ukraine. Their ability to achieve this will be a powerful factor in the future of that country and Europe as a whole.

“This is just one example of Keele’s commitment to international collaboration, and we hope that KPAC will make a strong contribution to the reform programme in Ukraine through its research and expertise.”

The Keele Policing Academic Collaboration (KPAC) host a range of CPD events for police officers, academics and a range of other professionals. View the KPAC events calendar to find out more.