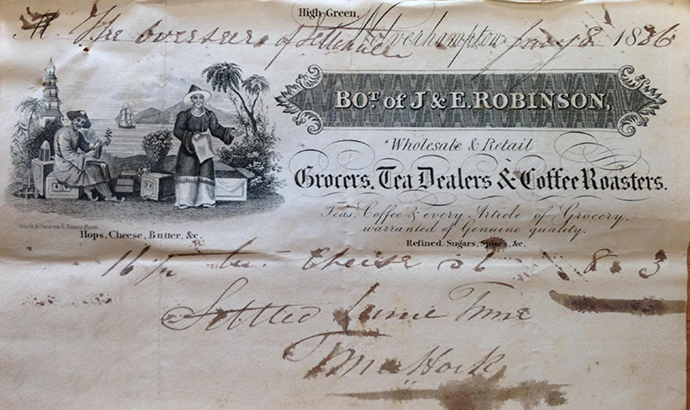 Professor Alannah Tomkins in collaboration with Professor Tim Hitchcock (Sussex University) has been awarded an Arts and Humanities Research Council (AHRC) grant of £728k to investigate the lives of thousands of people who benefited from the Old Poor Law.

Professor Tomkins, who is a Professor of History at Keele University, will work with Tim Hitchcock, Professor of Digital History at Sussex University, along with archive services and volunteers in Cumbria, Staffordshire, and Sussex, to examine over 50,000 overseers' vouchers - the scraps of paper used to register purchases of goods or services for use by the parish poor. The project will investigate the experiences of people across the social spectrum whose lives were touched by the Old Poor Law.

“The Old Poor Law in England and Wales, administered by the local parish, dispensed benefits to paupers providing a uniquely comprehensive, pre-modern early welfare system. In the process, it also offered entrepreneurial or employment opportunities to the people who supplied and administered the system.

“Very little is known about the midwives, tailors, workhouse mistresses, butchers and others who serviced the parish, and this research sets out to redress this omission by drawing on a class of little-used sources and on the collective support of volunteer researchers.”

Overseers’ vouchers were handwritten papers typically generated whenever the parish incurred a debt. They provide information about the identities of those who were paid for goods and services for the poor, and also reveal the scale of income to be gained by working on behalf of the parish.  Additionally, these vouchers expose the networks of traders who benefitted from the business - and those who did not - and the longevity of these relationships.

These vouchers survive in very large numbers for selected parishes, such as the 2,063 for Colwich in Staffordshire. Despite the presence of vouchers in parish collections having long been acknowledged, their use for historical research has been completely disregarded, due to the significant technical challenges of using them.

“Where they survive, vouchers provide a unique insight into the everyday workings of Europe’s most comprehensive, pre-modern welfare state.  By building on a pilot study in Staffordshire which demonstrated how the work of volunteer researchers could be integrated with that of professional historians, will allow these vouchers to be understood both as physical objects and evidence of economic exchange. We are particularly excited about how collaborating with volunteers offers historians of the Old Poor Law a new opportunity to explore the lives of ordinary people.”

The project will generate partial biographies, written by volunteers and project staff, of at least 1,000 tradespeople, administrators, paupers, and workers across the counties of Cumbria, Staffordshire and East Sussex, who are not represented elsewhere in the historical record in consistent ways.