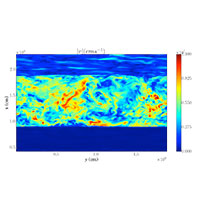 This corresponds to a single-core desktop computer running non-stop for over 1,000 years. The electricity cost for this computing time is roughly £50,000 and the total nominal value is in excess of £100,000. This award will boost the research undertaken within the framework of the ERC SHYNE project. The computing time will be used to run the first detailed 3D hydrodynamics simulation of convective carbon burning (see the preliminary results obtained by Andrea Cristini) in massive stars, and to run nuclear reaction rates uncertainty studies.

Dr Barry Smalley and a team of international collaborators, has won time on NASA's Kepler/K2 space telescope for a project on "Am stars: peculiarities, pulsations and planets". During two observing campaigns of 80 days, one measurement will be taken every 30 minutes of several stars within the K2 field of view to study the interaction between stellar pulsations and chemical peculiarity.

Dr Jacco van Loon, leading a large international team, has been awarded 7.1 hours with the Atacama Large (sub-)Milimeter Array (ALMA) at the 5km high plateau of Chajnantor in northern Chile, to observe CO and SiO molecules in the remnant of a supernova explosion which is slamming into an interstellar cloud.

Professor Nye Evans has won 5.5 hours on the NASA Stratospheric Observatory For Infrared Astronomy (SOFIA) to continue his study of "The Born-again phenomenon". "Born-again" red giant stars are very rare, poorly observed, and little understood events that can give us a glimpse of the eventual fate of the Sun. The SOFIA observations will throw light on a phase of the evolution of low mass stars that is very poorly understood.