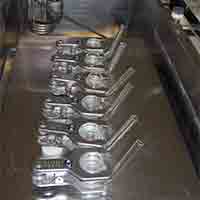 Professor Jon Heylings, Chairman of Dermal Technology Laboratory, a company based on the Keele Science and Innovation Park, was invited to write a historical review of the development of the OECD 428 in vitro (non-animal) test guideline for assessing the safety of chemicals that are applied to the skin. This has been published by the British Toxicology Society in a special September 2015 edition of their journal, and also the same week by the American Humane Society in their US web journal, Alternative Toxicology.

DTL was founded in 2007 with staff that moved to Keele from the AstraZeneca site at Alderley Park. The Company has grown from six to almost 20 graduate level employees, including MSc and PhD students at the University that work in their laboratories in Med IC4. Jon is honorary Professor of Toxicology in the Faculty of Health and is a member of the Pharmacy Enterprise Board. All Member States of OECD must now use this non-animal method that DTLs scientists developed for their new skin products. Test guideline OECD 428 has now almost completely replaced the need to apply chemicals to the skin of living animals and has been endorsed by the World Health Organisation as a true 'Alternative Test' in the field of Toxicology.

The link to the magazine that features the work is here: