With the arrival of World Alzheimer’s Day (21st September), Diamond Light Source takes a closer look at the research taking place at the synchrotron into the disease that is the most common cause of dementia and affects over 400,000 people in the UK.
No single factor has been found to cause the condition but during the course of Alzheimer’s disease 'plaques' develop in the structure of the brain, leading to the death of brain cells. These plaques are deposits of proteins which accumulate in the spaces between cells and interfere with the cell’s ability to communicate.

Metals in the brain

Work recently published in the Journal of Alzheimer’s Disease  (JAD) investigates how these plaques form, and whether their formation is connected to metal dysmetabolism in the brain. “We’re looking at why the peptide beta-amyloid deposits in the brain,” says Professor Chris Exley of Keele University, lead investigator for this research. “When it does so, it forms these so-called plaques that can lead to or cause the death of brain cells. The concentration of beta-amyloid is lower than its solubility so it shouldn’t deposit… so why does it? We’re looking at whether metals have a role to play here.”

Over the years a lot of evidence has been collected showing subtle differences in trace metals in the brain between people who experience a normal ageing process and people who develop a neurodegenerative disorder like Parkinson’s or Alzheimer’s disease. Synchrotron X-rays provide sensitive techniques to collect additional information about where the metal ions are distributed in brain tissues and what form they’re in.

Chris and his team have been using Diamond’s Microfocus Spectroscopy beamline (I18) to study post-mortem tissue from the brains of people with Alzheimer’s disease (AD tissue). The highly focused intense beam of X-rays generated on I18 enabled the team to look at sections of tissue to identify their chemical composition on the micrometre scale.

“We were concentrating particularly on areas of brain tissue that are rich in micrometre scale spherical structures, called spherulites,” explains Chris. “Under a polarizing microscope these spherulites show a characteristic “Maltese Cross” pattern of light extinction. Nearly identical structures were observed in sections of Alzheimer’s disease brain tissue. This raises the intriguing possibility that spherulites are the in vivo form of what have been called senile plaques in post-mortem tissue.” 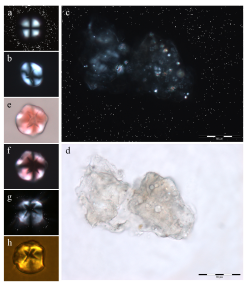 The image to the left shows spherulites formed under near-physiological conditions in vitro. The “Maltese Cross” pattern can be clearly observed in the single spherulite images a,b and e-f. Images c and d show a group of spherulites within a matrix of amyloid beta. The scale bar is 50 microns across.

The team used synchrotron X-ray fluorescence to examine these spherulite-rich regions of AD tissue and generated copper maps, overlaid with light microscopy images identifying the location of spherulites. The results showed an increased density of spherulites in regions where copper concentration is higher.

“We are very intrigued by these results,” says Chris. “They suggest that the organisation of spherulites into such highly ordered structures probably involves metals, most likely copper or aluminium. The next step is to figure out exactly what role these metals play. For example, does the metal act as a nucleation site? Or does the metal bind to the fibrils and reorganise them? If we can understand how plaques form, we can start to look at how the process might be prevented”

Other Alzheimer’s research projects at Diamond

Also involved in this research was Dr Joanna Collingwood from the University of Warwick. Joanna recently attended the Royal Society Summer Science Exhibition to talk to members of the public about her studies into the influence of metals in the brains of neurodegenerative disease sufferers.

I18 isn’t the only facility available at Diamond to study Alzheimer’s disease. B23, the Circular Dichroism beamline specialises in characterising and investigating the structural properties of chiral materials, like peptides, proteins, sugars, lipids and many drugs, to further understand the structure-function relationship. B23 has been used to examine the structure of short peptides, the protein fragments which make up plaques.

For more information about Alzheimer’s disease in general, visit the Alzheimer’s Society: http://alzheimers.org.uk/