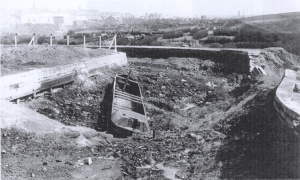 The Elizabeth shortly before the canal was infilled in 1962, showing the breach that caused the disaster. (Image from Burslem Port Archives)

A Keele University lecturer and his research team are set to use Time Team-style geophysics to find a barge buried when a canal was filled in almost 50 years ago.

Dr Jamie Pringle, lecturer in Geoscience, is working with the team behind the Burslem Port Project, who aim to restore and reopen the disused Burslem Branch Canal which opened in 1805 as a branch of the Trent and Mersey canal to serve Burslem's growing ceramics industry.

A National Coal Board narrow boat from Wolstanton Colliery called Elizabeth was moored in the canal near its junction with the Trent and Mersey main line canal; it was left stranded when the canal breached in 1961 and was believed to have been buried when the canal was filled in.

An amateur ground study in 1999 indicated that the boat was still in its original position in the disused canal. If it is found to be in good condition the boat may be lifted out and considered for possible restoration.

Dr Pringle said: “We will be using geophysics, like Time Team does, in an effort to search for the hidden boat. We will have a fairly good chance of finding it as it should only be around six feet down and within the filled in canal, if the reports are correct.”

David Dumbelton, of the Burslem Port Project, said: “We hope to restore the canal as part of a wider community facility and visitor attraction under the name of Burslem Port, and we would be delighted if we can find the Elizabeth.”