Dennis gets on his bike to raise money for sport charity 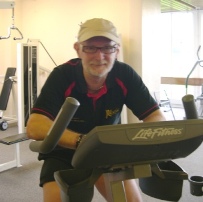 Keen cyclist Dennis Bourne is set to pedal from Brussels to London to raise money for the sporting charity Right To Play.

The 60-year-old duty manager at Keele University’s sports centre, of Trent Vale, will join hundreds of cyclists for the gruelling three-day challenge in July, cycling up to 100 miles each day.

Dennis, who was an engineer before joining Keele University’s sports centre 20 years ago, took part in an Edinburgh to London charity ride for Right To Play last year with just three days’ notice – and is using the extra time this year to get in plenty of training, with regular rides to Shrewsbury and back.

He said: “The biggest challenge when you do something like this is avoiding straining your muscles. I will be very fit by July and that should help prevent it happening. I will also be more used to spending long periods in the saddle than I was last year, which will make it more comfortable.”

Right To Play works with disadvantaged children in 23 countries worldwide, using sport and play to educate youngsters on sensitive issues such as HIV/AIDS, promote healthy living and encourage the positive elements inherent in sport, such as tolerance, fair play, fitness, and cooperation.

Dennis said: “Right To Play is a great charity which aims to get children into sport and away from crime. Changing the culture they live in could change their whole way of life.”

Dennis aims to raise more than £1,000 for the charity. You can sponsor him at http://www.justgiving.com/DennisRobertBourne