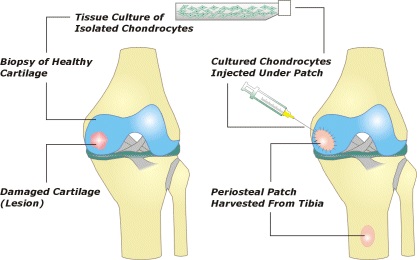 A rare treatment for a type of arthritis in the knee performed by a Keele professor has gained official approval to be funded by the NHS.

Autologous Chondrocyte Implantation (ACI) is a technique used to help patients with an articular cartilage defect or early arthritis in the knee, something that can impact younger people in their 20s and 30s – sometimes as a result of a sporting injury.

The procedure is currently only offered at The Robert Jones and Agnes Hunt Orthopaedic Hospital (RJAH) in Shropshire and performed by Keele University Professor James Richardson and Mr Pete Gallacher, both experienced Consultant Orthopaedic Surgeons.

The procedure sees a sample of cartilage removed from the patient’s knee from which their own cells are then grown in a laboratory for around three weeks. These cells, known as chondrocytes, are put back into the patient’s knee in a second bigger surgical procedure.

ACI clinical trials have been running in several locations over a period of years, but the National Institute for Health and Care Excellence (NICE) has now approved the technique for wider use on the NHS.

RJAH, the only site in the UK currently able to offer ACI, has been working in partnership with Keele University and the Oswestry-based Orthopaedic Institute; the trio setting up the Oscell Cell Manufacturing Facility to produce the chondrocytes.

Professor Richardson said: “This facility has provided treatment to over 400 patients from across the UK in the last 20 years, along with many published studies of the outcome of ACI in the knee and ankle.

“This news from NICE will be a great help to patients. A significant proportion of people with these defects are very upset at their inability to even play with their children as they are so disabled by the painful knee.

“ACI is not simple for the surgical team, and so patients will have to travel to a specialist centre. The traditional ACI still seems the best option, although new improvements are being developed and tested.

“Patients must understand that the cultured cells are the option that is tried and tested and now supported by NICE as the most cost-effective treatment. At Oswestry there is one other person I must thank for 20 years of hard work: Paul Harrison and his team, who do the daily work of culturing the cells and Brian and Karen Ashton from the original team who helped launch the treatment.”