What is the 2nd Amendment and how does it impact US gun control? 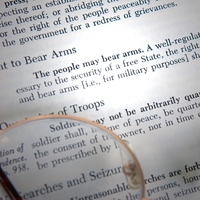 The Second Amendment to the Constitution is a touchstone for the many people who identify with American society’s enduring affinity for firearms. And every time there is an atrocity, such as the mass shooting in Orlando, debate inevitably settles on how this part of the Constitution effectively prevents the adoption of workable gun control measures.

But ironically, the Amendment played almost no substantial part in legal or constitutional jurisprudence involving gun ownership until 2008 and even the recent change in Supreme Court interpretations does not give it a significant role in gun regulation. The importance of the Second Amendment lies much more in its symbolism for those people defending gun ownership and as a rallying point for those supporters.

The Amendment is a telling reminder of America’s longstanding relationship with guns that goes back to its colonial heritage and has developed a strong and popular mythology surrounding this legacy. But it is not a clear endorsement of the right to own a gun. The text reads:

A well regulated Militia, being necessary to the security of a free State, the right of the people to keep and bear Arms, shall not be infringed.

The Amendment came out of the colonies' longstanding suspicion of standing armies, accentuated by the recent War of Independence against Great Britain. It sought to enshrine protections for local and state militias, who would provide a bulwark against any possible encroachment of power by the new national government – and its national army – which was established by the Constitution in 1789.

The Second Amendment was always about federalism, protecting the power of the states to have and regulate militias rather than granting individual rights, and the courts interpreted it that way consistently until two cases in 2008 and 2010 completely upended more than two centuries of legal and constitutional history.

In the case of District of Columbia v. Heller, 554 U.S. 570 (2008), the Supreme Court held that the Second Amendment protects an individual right to possess a firearm – independent of any service in a militia – for legal purposes such as self-defence. In a subsequent case, McDonald v. Chicago, 561 U.S. 3025 (2010), the Court extended this protection against bans by all state and local governments.

These cases established the individual right to gun ownership for the first time – but, significantly, they were only applied in relation to absolute bans. The Supreme Court continues to allow almost all restrictions on firearms short of an outright ban. It is the politics of gun regulation that is much more important if you want to understand the gun debate in the US. The Second Amendment, meanwhile, is a political symbol rather than a strong legal protection.

An understanding of the place of guns in American culture is needed to fully understand the issue of gun regulation. The General Social Survey (GSS), has found that gun ownership has declined from 49% of households in 1973 to 34% in 2010, though Gallup opinion polls report a lower figure, unchanged from 1972 to 2010 at 43%. Whichever figure is most accurate, a substantial portion of American households own a gun. Traditionally, hunting was the main purpose for gun ownership but it has declined from 49% in 1999 to 32% in 2013. Personal protection has now become the main reason cited by gun owners, rising from 26% in 1999 to 48% in 2013.

Despite worries over personal safety, fuelled by widespread media coverage of regular mass shootings, the homicide rate from firearms has fallen hugely in the US since the 1990s. Compared with 1993, the peak of US gun homicides, the firearm homicide rate was 49% lower in 2010. The rate for other violent crimes with a firearm was 75% lower in 2011 than in 1993. While violent crime has plummeted since the 1990s, however, mass shootings consume most efforts around gun control today. People believe that crime has gone up rather than down – and this continuing fear of crime influences gun policy.

Public opinion has been decidedly in favour of stricter gun control for decades, but the recent polarisation of politics in the US has also influenced people’s views on guns. Support for gun control is now roughly matched with support for gun rights in the wider population.

The main areas of gun regulation concern limiting who can purchase a gun. There have been large majorities in favour of restrictions such as background checks for those with criminal records, limiting access for the mentally ill, and creating a national database to track gun sales. Bans on assault rifles, such as the AR-15, used in Orlando are more controversial. These sorts of weapons were banned in 1994 under the Clinton administration but the law was allowed to lapse in 2004 and stands no chance of being re-enacted by the current Congress.

Differing views of gun control across party lines are much more evident now, with Republicans less likely to support a national database or assault weapon ban. These issues have erupted into the presidential campaign. Hillary Clinton called for stronger background checks and a national database, while Donald Trump – who used to support stricter gun control – accepted the endorsement of the National Rifle Association (NRA) and claimed that Clinton “wants to take away Americans’ guns”. These statements are largely symbolic as neither party appears eager to engage in a strong attempt to enact gun control due to the potential for a backlash from gun enthusiasts.

The most prominent change in state laws regarding guns in recent times has been to make guns more, rather than less, available. In reaction to the massacre at Sandy Hook Elementary School in 2012, Wayne LaPierre, the NTA vice president, argued that “the only thing that will stop a bad guy with a gun is a good guy with a gun”.

States adopted this approach, with 41 adopting laws allowing the carrying of concealed guns by 2014. Debates rage over whether this availability makes the public more or less safe, but it is the sharp edge of the current debate in the states. Meanwhile, in Sandy Hook, Newtown – and now Orlando – hundreds of families continue to mourn their dead as mass shootings continue with a dispiriting regularity.