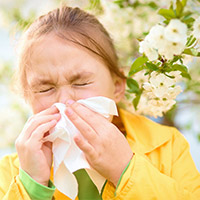 We’ve found that tracking Twitter users’ mentions of their hay fever symptoms, rather than any specially-created hashtags, can give us an accurate representation of which locations are reporting high levels of hay fever...

Researchers from Keele University have found that Twitter could provide a more accurate way of tracking hay fever in the UK than current Met Office pollen counts and NHS data, paving the way for sufferers to be able to access free real-time hay fever information based on their precise location.

After realising that there is currently no method for identifying real-time location-based hay fever occurrence, the researchers collected and analysed over 500,000 UK-located tweets that mentioned hay fever over two years. These tweets were cross-referenced with NHS data to prove that spikes in mentions of hay fever closely correlate with the days that patients report to GPs with hay fever symptoms. The researchers have suggested that this could provide a higher level of detail for sufferers, as Twitter can contain geolocation data, is in real-time and consists of actual reports of hay fever, rather than just pollen counts.

Dr Ed de Quincey from Keele University, who led the research team, comments:
“We’ve found that tracking Twitter users’ mentions of their hay fever symptoms, rather than any specially-created hashtags, can give us an accurate representation of which locations are reporting high levels of hay fever incidence, and when they’re experiencing them.”

The next stage of the research will be to delve deeper into the content of tweets about hay fever, with further qualitative analysis planned to help accurately identify which locations see a higher incidence of hay fever.

Ed de Quincey continues: “The data could be used to create a real-time hay fever hotspot map. This could give more specific information for sufferers than the current Met Office pollen count system, which only collects data from and forecasts for a limited number of points across the country. Ideally, this could then be combined with the Met Office’s daily pollen count and other sources of hay fever information on the internet to provide sufferers with a comprehensive, one-stop update about current hay fever conditions.”

For further information, or to request the full research paper please contact:
Gemma Perks on 0121 713 3829 or gemma.perks@mccann.com

About Keele University
Keele University, set on 600 acres, is one of the largest campus universities in the UK and has more than 10,000 students on its Staffordshire campus. Keele students are officially the most satisfied in the country with the University consistently placed among the top 10 universities in the UK for student satisfaction since 2011. For two years running, 2014 and 2015, Keele has been first for student satisfaction, as voted for by students in the National Student Survey.

The University is top 10 for graduate employment rates in the UK, with 96% of graduates in employment or further studies within 6 months of graduating. In the most recent national Research Excellence Framework (2014), 97% of Keele research was classified as world leading, or of international importance. The innovations and discoveries of Keele academics are key contributors to wider social and global issues. Keele is a leading world player in many research areas, including primary health care, especially around arthritis and muscular skeletal problems, secondary health care, including stroke medicine, and health related research on insect-borne diseases in the Tropics; in environmental science, astronomy and the life sciences; and in areas of the humanities and social sciences, including music, history and English Literature.