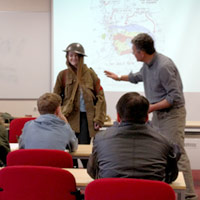 As part of our Somme Centenary activities, students from the local area have been taking part in a ‘Remembering World War One’ project.

A group of year 9 students from Biddulph High School in Staffordshire visited the campus, to learn more about the Battle, and some of the scientific breakthroughs of World War One.

The event saw sessions delivered by Keele lecturer, Jamie Pringle, who talked about how local men from Staffordshire took their mining skills to the trenches of the Western Front; Keele student Ieuan Smith, who demonstrated the differences between British and Australian soldiers’ equipment; and Time Team’s Andy Robertshaw, who challenged the Y9s to carry as much equipment as a soldier on the Somme.

The event was organised and funded through the Keele-led Higher Horizons project. Project Officer Hannah Merry, said, “These days are a great opportunity for students to challenge and expand the knowledge they have gained in the classroom, and see the real equipment carried by soldiers 100 years ago. The students particularly enjoyed seeing and wearing real uniforms and weapons worn by soldiers on the Front.”

Few people know that Stoke-on-Trent was the UK specialist respiratory centre for lung damage and disease in World War 1; the techniques developed there led to major advancements. Plastic surgery for those with severe wounds was also pioneered during this period.

For more information about the World War One Science and Heritage project, contact Dr Jamie K. Pringle at Keele University on 01782 733163 and j.k.pringle@keele.ac.uk.