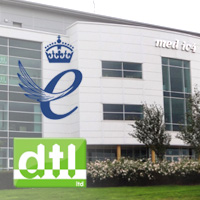 Dermal Technology Laboratory (DTL Ltd) has been awarded one of the most coveted accolades in UK business, in recognition of its international growth and success over the past six years. DTL, based at Keele University Science and Innovation Park will receive a Queen’s Award for Enterprise - which is decided and awarded by Her Majesty the Queen. This accolade has particular significance on April 21st, being Her Majesty’s 90th birthday.

The laboratory-based science company is jointly owned by David Fox and Jon Heylings and began its operation in one of the Med IC4 back in 2007. DTL provides a safety testing service in the field of dermal absorption to the pharmaceutical, cosmetic and industrial chemical sectors, helping companies develop and register safe and effective products. The company will be commended in the international trade category in recognition of its continuous achievement during recent years, developing its collaboration with major science-based companies across the world who place contracts at DTL’s Keele University facility in Staffordshire.

DTL chairman Jon Heylings and his fellow scientists developed the OECD test guideline for assessing dermal absorption using a non-animal (in vitro) approach. The method using donated human skin tissue rather than living animals to test skin products was approved by the member states of OECD in 2004 and has now completely replaced animal testing of skin care products in the EU. The method is now used worldwide and is a testing requirement set by government authorities that approve new products that come in contact with the skin, either intentionally or occupationally. Most of the clients who use the expertise of DTL are multinational organisations based in mainland Europe with other clients from the USA and Japan.

DTL is also aligned with several enterprise activities with Keele University, mainly with the Faculty of Medicine and Health Sciences. Jon, who holds an honorary position as Professor of Toxicology in the School of Pharmacy at Keele supervises PhD and MSc research students who spend part of their courses in DTL’s laboratories. This ensures that education, training and business work together at Keele for the benefit of each stakeholder.