New study finds ‘everyone’ in Stoke-on-Trent turns over pottery… 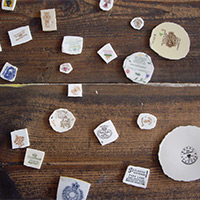 When so many people in an area do something that means something to them and that captures their own heritage so beautifully and regularly, then it needs protecting as a tradition...

A paper published this week claims that the tradition of turning over pottery by people from Stoke-on-Trent should be considered a form of local heritage in its own right. “The Turnover Club: locality and identity in the North Staffordshire practice of turning over ceramic ware” was published by Dr Rebecca Leach, of Keele University, in the International Journal of Heritage Studies this week.

Based on an online survey of 600 people and an ongoing research project involving face-to-face interviews, Dr Leach found that turning over pots shows there is still a fierce pride in local ware. It is also done so often by so many people, she thinks the practice should have a higher status as a local tradition.

According to Dr Leach: “When so many people in an area do something that means something to them and that captures their own heritage so beautifully and regularly, then it needs protecting as a tradition – like Morris dancing or folk music, turning over has become part of what it means to be from Stoke-on-Trent.”

She has been working with local heritage activists Ceramic City Stories to make sure this part of local tradition is fully recognised, saying “One of the things we noticed from the initial survey – which was self-selecting – is that the majority of respondents were middle-aged or older. There’s a real sense of sadness for some, not only that the industry has declined significantly, but also that younger people might not have the same appreciation of the skill and art that goes into local ceramics – we really need to find out more about whether younger people appreciate the legacy of ceramics”.  The Turnover project is seeking to take the findings and the stories back into local communities to explore the importance of local pottery to younger generations.

The research also demonstrates that the controversial debates about ‘Made in Stoke-on-Trent’ backstamps are not going away. Dr Leach found that the Stoke-on-Trent mark continues to drive affection and good feeling for the city, even when people have long since moved away.

Leach, and her collaborator Danny Callaghan of Ceramic City Stories, are planning a series of new Turnover Tales events to explore this tradition further. The next one is planned for September 30th at the Emma Bridgewater Factory Café where they’ll be collecting stories of turning over, and mid-20th century ware. The Turnover Tales day is part of Keele’s Live Age Festival and leads into a major exhibition – Back to the Drawing Board - of the design work of Pat Albeck and Peter Rice (Emma Bridgewater’s parents-in-law) planned at the University in the autumn. Albeck, a prominent surface pattern designer, produced images for a number of companies including the popular Provence pattern for Spode’s Royal College range, as well as more recent work produced for the National Trust by Portmeirion and for Emma Bridgewater herself.

• The majority (84%) of respondents in the survey turn over pottery every time or most of the time they encounter a piece.
• They do this wherever they are – locally, to spot hotelware on holiday in Britain or Europe, and in far-flung places such as the Arctic Circle and Timbuctoo.
• The primary reason is not about value or particular brands, but about the piece being from Stoke-on-Trent.  78% do it because they want to confirm it is made in Stoke-on-Trent.
• 77% want to confirm the potbank, maker or painter.
• Most claim turning over is NOT about finding out the monetary value.
• The most important word used by people was ‘pride’ in their heritage but they get teased for doing it.
• For those who have moved away, it is a key part of maintaining their North Staffordshire identity; for those who’ve moved into the area, it is a way of beginning to belong.
• Older or experienced people often don’t need to turn over but they do so anyway to ‘test’ that they still know about shapes, patterns and makers.
• Lots of people do it to check whether local cafes and restaurants are using local ware. Needless to say, they get very upset when they don’t.
• Turning over creates lots of emotions: as well as pride, sometimes sadness and regret about the loss of the industry, or loss of local knowledge, sometimes anger – especially at overseas-made ware pretending to be local.