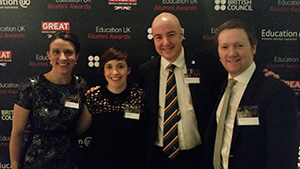 The 2016 British Council Education UK Alumni Awards highlight the achievements of international alumni who studied at a UK university who can articulate the impact of their UK education on their professional success. Awards are given out in three categories: Professional Achievement Award, Entrepreneurial Award and the Social Impact Award.

Morgan Davison (2009) was the first Keele in the USA Scholar, supported by a scholarship created by alumni in the USA. She graduated with an MA in Human Rights, Globalisation and Justice in 2011 and now works as a specialist adviser in anti-human trafficking for the US Department of Homeland Security.She has a long and impactful record of charitable and development work in Africa - often using sport to promote human rights, equality issues. She was short-listed for the Social Impact Award.

The Education UK Alumni Awards were presented at a gala in New York attended by Matthew Rycroft, Ambassador and Permanent Representative, UK Mission to the United Nations and Paul Smith, Director USA, British Council. Morgan was accompanied by members of her family and fellow Keelites representing Keerle University and the Keele in the USA alumni network.

Morgans said afterwards, "Although I did not win, tonight was an incredible honor. I spoke very fondly of Keele. Had it not been for my scholarship, I may not have attended Keele. Had I not attended Keele, I would not be where I am today. I am so incredibly thankful for my time at Keele.... Keele! Keele! Keele!"