Confronting the Challenges of the 'New Normal' 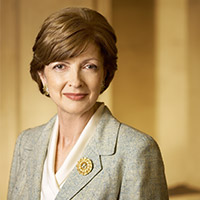 Dame Fiona Woolf, a Keele graduate, former President of the Law Society for England and Wales and Lord Mayor of London in 2013/14, will deliver a public lecture at Keele University, entitled 'Power, Reputation and Influence: Confronting the Challenges of the 'New Normal''.

In her talk, Dame Fiona Woolf will explore the different ways in which our society can respond creatively and collaboratively to meeting the needs of growing urban populations on a resource constrained, warming planet.. The lecture will be followed by a Q&A.

Fiona Woolf is an energy and infrastructure lawyer and has advised over 28 governments and the World Bank on energy reforms and infrastructure.  A Keele graduate and former President of the Law Society for England and Wales, Fiona Woolf was Lord Mayor of London in 2013/14 during which she extensively promoted the UK-based services sector, diversity and inclusion and the sustainable, low-carbon economy.

This special event will also mark the official launch of the new Institute of Liberal Arts and Sciences at Keele University.  Building on Keele’s founding vision of a broad, liberal and multidisciplinary academic environment, the Institute will draw together the many rich and diverse educational and research activities across the campus to enhance and strengthen the academic portfolio and cultural offer of the University.

FREE
Admission by ticket only
All welcome