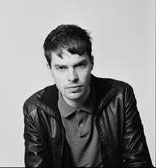 Released in 2007, (We Are) Performance is described in the magazine by Hurts’ Adam Anderson as “a brilliant album” which has “that inescapable feeling of youth, of unbounded excitement, of danger, and, of course, heartbreak”.