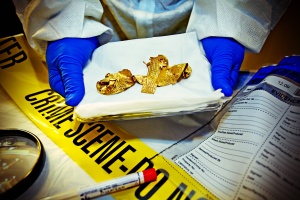 Forensic science will be used to show how modern techniques can unlock the secrets of the Staffordshire Hoard at a free family event at the Potteries Museum and Art Gallery.

A series of science-themed workshops and activities will run throughout the museum, including an archaeological “mock” dig, showing the procedures used while excavating the Hoard – the largest collection of Anglo-Saxon treasure ever found – and a demonstration of how interactive geophysical equipment detected the buried items.

Visitors can pan for “gold” and search for buried coins as well as examine, search and identify semi-precious stones and other mineral stones using microscopes. Anglo-Saxon re-enactors will be on hand to demonstrate ancient weaponry and their impact on the human body.

As part of the day an Anglo-Saxon stage drama will be re-enacted by pupils from Haywood Engineering College in Burslem, placing the Hoard within its historical context and exploring some of the possible theories regarding why it came to be buried in a Staffordshire field.

Held in partnership with Keele and Staffordshire Universities and funded by the Engineering and Physical Sciences Research Council, the event will take place from 10.30am to 4pm on Saturday, March 19, at the museum in Hanley as part of National Science and Engineering Week.

Staffordshire University Professor of Forensic Science Education John Cassella said: "Working with students from a local school and Adrian Smith from an Anglo-Saxon re-enactment society, we hope to examine some of the theories about why the Hoard was buried where it was. There are a number of forensic elements associated with the Hoard which we will be demonstrating during the event in a bid to develop a deeper understanding of the Anglo-Saxon period.”

“As local Universities, we have a responsibility to get involved and help people become educated and interested in the Hoard which is of such historical significance to our region and indeed nationally.”