How did you get into medicine?

I commenced my degree in medicine at Keele in 2007. I previously completed a BSc, also at Keele, in Medicinal Chemistry and Biology. I was interested in becoming a doctor prior to starting my BSc but the biology content of this course really cemented my desire to pursue a career in medicine. I was really impressed by the facilities at the medical school, particularly the anatomy suite, which was my first exposure to pathology. I enjoyed the problem-based learning and the lecturers were both knowledgeable and approachable.

How did the course at Keele prepare you for life as a junior doctor?

I graduated from Keele in 2012 and moved to Scotland for Foundation Years 1 and 2. I felt that the wide ranging clinical placements that I underwent during my clinical years at Keele provided a great basis for starting as a junior doctor. The ‘hands on’ approach from Year 1 of medical school was definitely an advantage when having to perform examinations and procedures for real!

How did you decide what to specialise in?

During my foundation training I had the opportunity to do a placement in pathology. I found it absolutely fascinating and it really suited my passion for the science of medicine. I started my pathology training in Bristol in 2014 and then moved to Liverpool in 2016 for specialist forensic training. I completed my training in February 2020 and joined the Home Office list of certified forensic pathologists in March. I currently perform forensic post mortems in the South East of England but also do routine autopsy work in the North West.

What does your job involve? What is a typical day like?

Forensic pathology focuses on the investigation of deaths, mainly in suspicious circumstances. Forensic pathologists are instructed by the police or the coroner’s office. The purpose of a forensic examination is to provide expert evidence for use in court (coroner’s, crown, and family).

Many days are spent in the mortuary performing post mortem examinations and discussing findings with investigating police officers. The police may also ask a forensic pathologist to attend a scene of crime prior to conducting the examination. Other days are spent preparing reports for court, and attending and giving oral evidence. Many forensic pathologists also perform post mortem examinations in non-suspicious cases, determining the cause of death and identifying other relevant pathology. 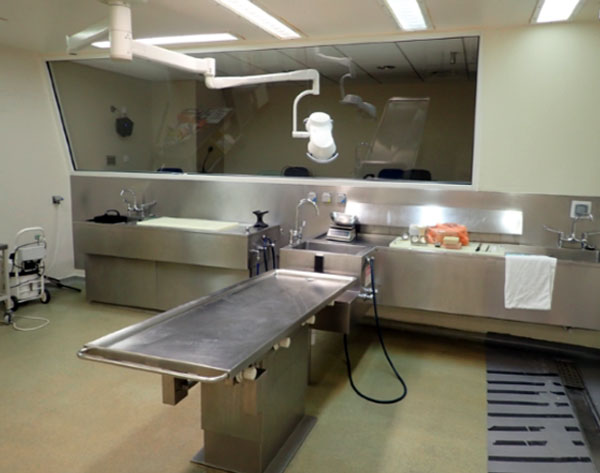 A mortuary for post-mortem examinations