Josiah Clement Wedgwood (1872-1943), sometimes referred to as 1st Baron Wedgwood or Josiah Wedgwood IV, was the great great grandson of Josiah Wedgwood I. Making his mark in politics rather than the pottery industry, Josiah was elected Member of Parliament for Newcastle-under-Lyme from 1906 to 1942, crossing Liberal to Labour party lines in 1919. 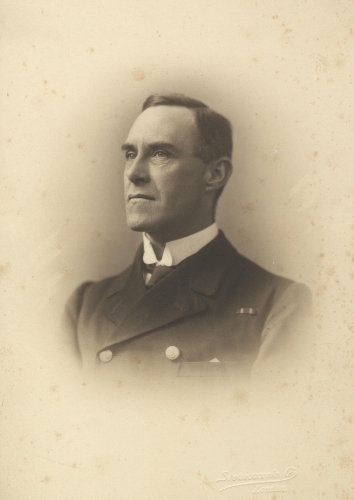 On the announcement of war in 1914, Josiah was to be unpopular in speaking out against the government not being prepared for war, predicting people would suffer starvation before the end. Despite this, he volunteered and was appointed Lt. Commander by his good friend Winston Churchill.

After just ten days of training, Wedgwood crossed the channel to Dunkirk, commanding a division of armoured cars. Being one of the first times armoured cars were used in active service, Josiah would write home with amazement at their capabilities. 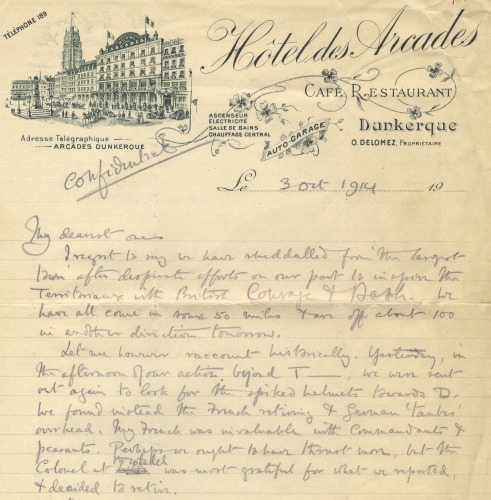 Letter from Josiah to his family, written on the headed paper of a hotel in Dunkirk, 3rd Oct. 1914 [JCW7]

Wedgwood played a prominent part in the Gallipoli expedition. His first-hand account describes the landing on 25th April 1915 and the taking of Sedd el Bahr fort. He also details how the terrain was unsuitable for armoured cars and so the eleven machine guns were dismounted and placed on flat stands on the bow of the beached ship, SS River Clyde, on V Beach.

Josiah was seriously wounded in the ensuing battle, after which he would receive a Distinguished Service Order (DSO) for his part. 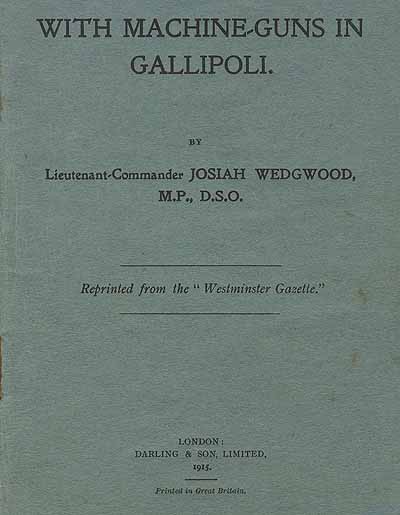 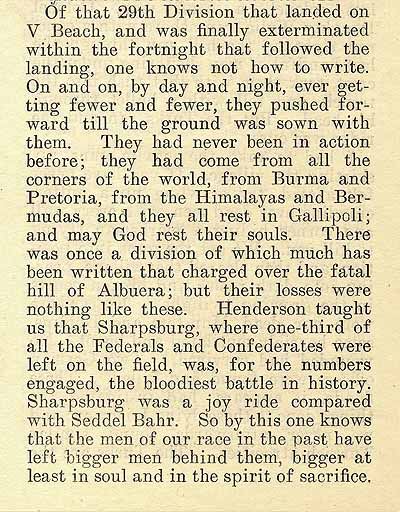 ‌Extract from With Machine Guns in Gallipoli by Josiah Clement Wedgwood, 1915 [JCW3]

After being wounded in combat, it was by luck that Josiah would survive. Lying in the infirmary surrounded by other wounded soldiers and on the cusp of death, he was spotted by a fellow MP who had Josiah treated immediately.

Josiah was eventually sent home to recover and spent the remainder of the year in England. During that time, he dedicated himself to the domestic war effort, joining the Trench Warfare Committee at the request of Churchill. 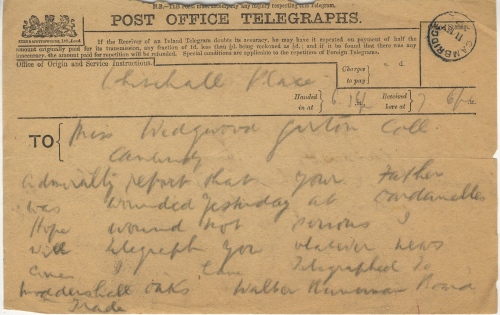 Telegram from Walter Runciman informing Wedgwood’s daughter that her father has been injured, 11th May 1915 [JCW8]

As both an economist and a philanthropist, Josiah spent much of his time reviewing the goings on of the war.

In this report he gives a particularly scathing account of the destruction of the 46th Company, determining the cause to be bad organisation by those in charge. In response, Douglas Haig blames the men for not following orders. Josiah had already submitted a report on allied activities in France and Belgium, commenting on disorganisation and how not nearly as many French troops had been killed as English. 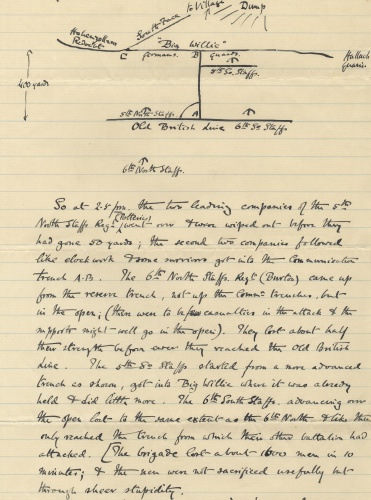 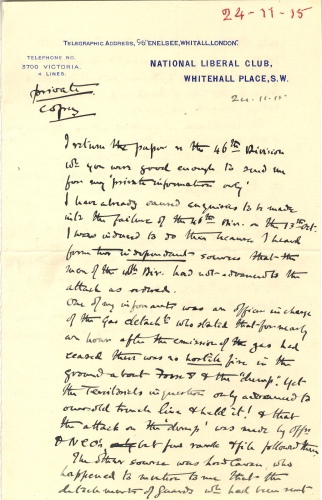 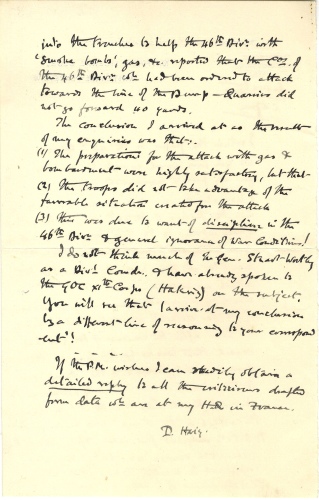 After nearly seven months, Wedgwood had recovered enough to resume active service and accepted a posting to East Africa as an army captain. Letters sent home during this time tell of safaris and encounters with exotic animals.

Josiah would not remain in Africa for long. Under General Smuts, his armoured cars proved too slow to keep up with the cavalry. He would stay just long enough to take a German camp and write to his mother that he was “sitting at a German table, using a German pen”. 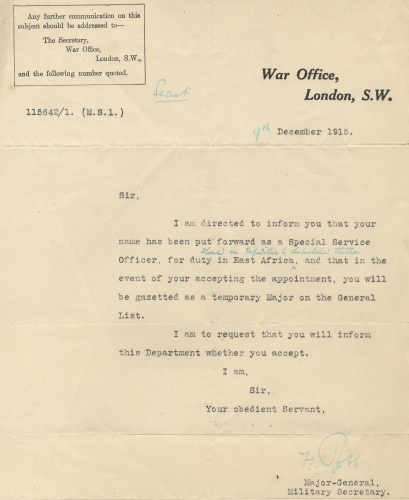 After a short time at home, Wedgwood was sent to Russia on a liaison mission in order to secure Russia as an Allied force and not see them side with Germany. The instructions he was given outline the objective to “make clear to Siberians the worthlessness of German promises” and detail exactly where Josiah should travel, who he should meet and when he should make contact.

Wedgwood concluded from the expedition that America would be in the best position to influence Russia. 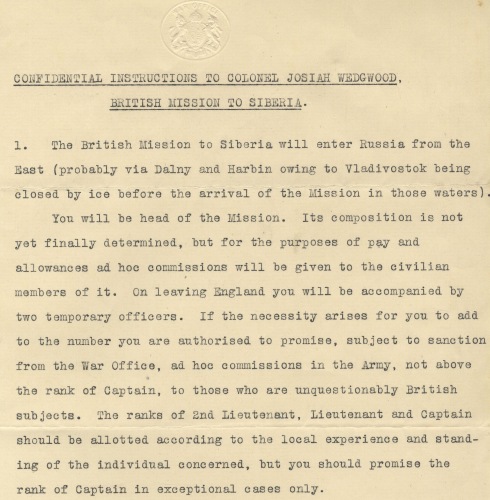 The Staffordshire Sentinel newspaper held Wedgwood in high regard and after the war was over, published a short sketch of Josiah’s life up to that time. It includes Wedgwood’s education, political career and wartime achievements, also mentioning Josiah’s children and how they fared during the war years.

The Belgian town of Ypres was all but obliterated by artillery fire during the course of the war. The ruins of Ypres Cathedral are depicted on this New Year’s greetings card, sent to Wedgwood by Lt Sir Aylmer Hunter-Weston, with whom he had served in Gallipoli. Josiah was not forgotten by his brothers in arms, and he is not forgotten by us. 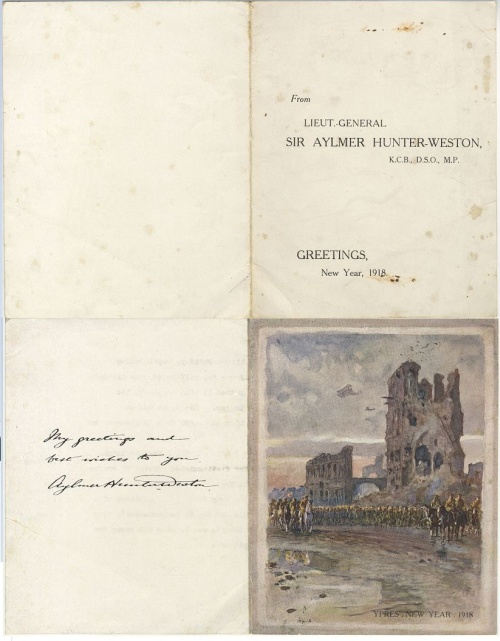 Josiah Clement Wedgwood was an intensely family-oriented man and this is reflected in the extensive collection of family correspondence held at Keele.

Married twice, Josiah had seven children and his eldest son Charles served with him in Gallipoli. Charles [pictured bottom left] was a gifted artist, but his career was hampered by illness largely caused by his war-time experiences. Some of his early drawings survive in the Archives. 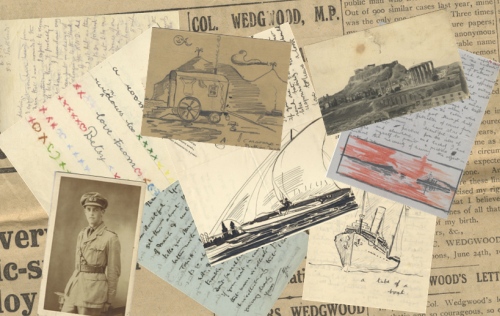