Keele History student Billy Warmington has researched and digitised original materials from the Sneyd Archive to produce this display illustrating the life and times of Charlotte Augusta Sneyd.

The Library holds Sneyds of Keele Hall papers dating from the fourteenth century to the twentieth century, comprising deeds, manorial, estate, legal and business records, as well as personal correspondence, music, watercolours and sketches. For permission to use and reproduce material from this exhibition, please contact the Special Collections and Archives, email: h.burton@keele.ac.uk or tel: +44 (0)1782 733237.

Charlotte Augusta Sneyd (1800-1882) was the middle of nine children. Her parents were Louisa Sneyd, nee Bagot (1764-1834) and Lieutenant-Colonel Walter Sneyd (1752-1829). The Sneyds of Keele Hall were landed gentry, prominent in county society, with several members of the family serving as MPs, Sheriffs and Mayors for Chester and Staffordshire.
Charlotte’s father, Colonel Walter, took the family into the highest social circles. Walter was MP for Castle Rising and also served as Colonel with the Staffordshire Regiment, acting as bodyguard to King George III at Windsor for 14 years. 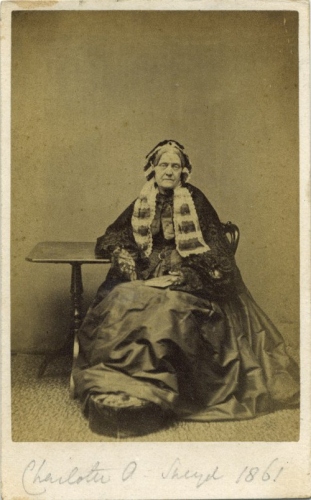 Charlotte Augusta Sneyd, Carte de Visite, 1861 [Sneyd Papers]
(The only surviving image of Charlotte, taken at the age of 61)

Through Colonel Walter’s service to the King, an easy relationship developed between the Royal family and the Sneyds. These links were further cemented when Queen Charlotte became godmother to Charlotte Augusta in 1800.

Charlotte maintained a friendship and shared correspondence with the Princesses Mary and Sophia, frequently discussing the main gossip and family matters. Here Charlotte speaks of going to the Queen’s house to see Princess Charlotte dressed for her wedding. 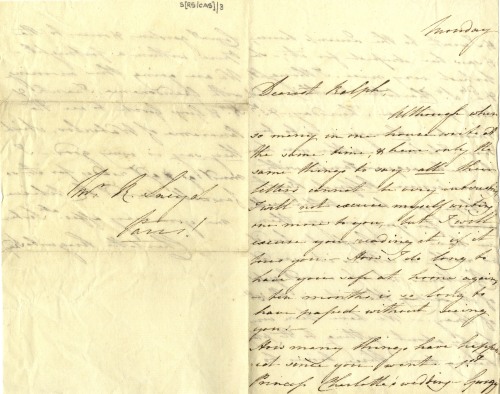 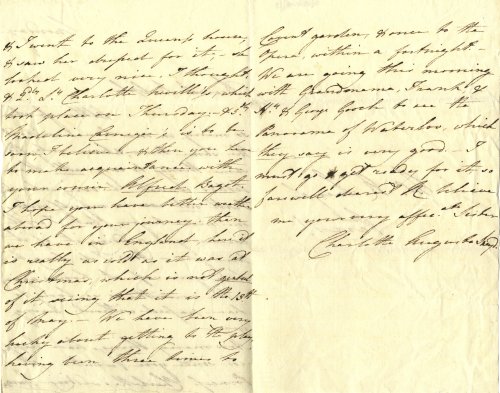 The Sneyd sisters were not given the same education as their brothers, but Louisa Sneyd encouraged her daughters to develop their creative and artistic talents. Charlotte in particular possessed considerable artistic, literary and musical ability.

A more than competent musician, Charlotte was taught by William Crotch, the well-known former child prodigy and first principal of the Royal Academy of Music. As well as composing some musical pieces, Charlotte wrote several plays and dramas with music, for the entertainment of family and friends.

In this letter Crotch suggests that Charlotte is using the wrong notes to create tension in her musical piece, and that she should consider changing it to get the desired effect. 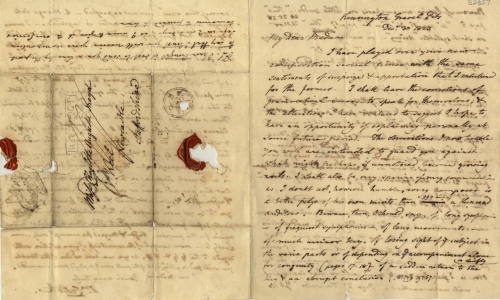 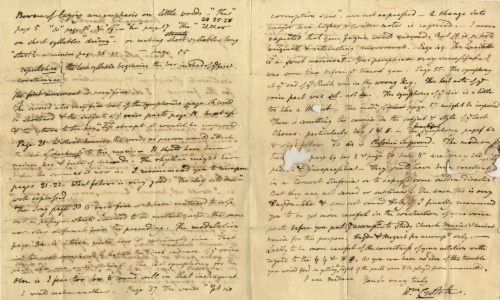 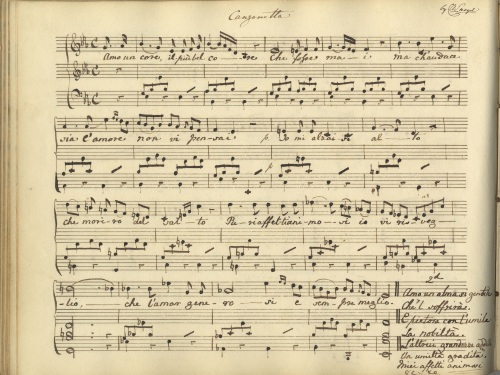 Charlotte’s efforts at self-improvement display a genuine intellectual interest. Fluent in French, German and Italian, her most notable literary work is a translation for the Camden Society of an important historical view of England, from a late fifteenth century Italian manuscript belonging to her brother Walter. 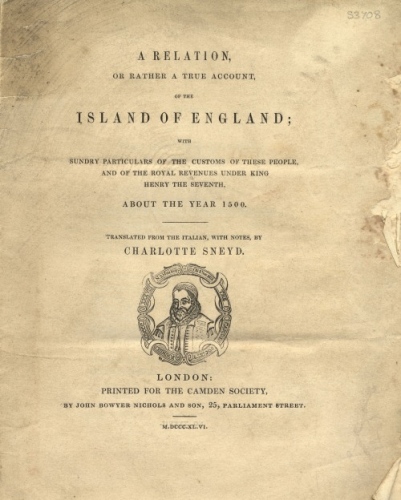 A relation, or rather a true account, of the Island of England; with sundry particulars of the customs of these people… (Camden Society Publications, 37, London 1846) [Sneyd S3708]

Taught by the artist William Mulready (RA), Charlotte would paint for her own amusement during long periods away from Keele. Cheverells, Hertfordshire, was a favoured place in which she stayed with her sisters. It was their home from 1830 until 1851, rented from Sir John Saunders Sebright.

Charlotte’s detailed paintings of interiors provide a valuable insight into the domestic and social life of the privileged class in the nineteenth century. 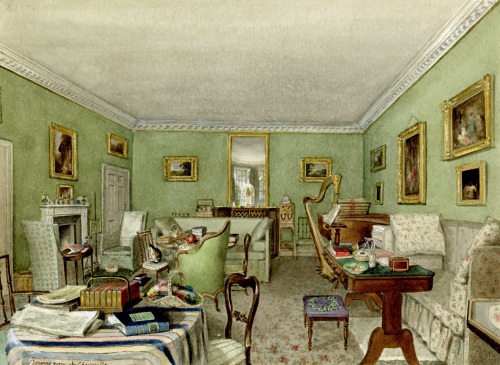 As well as landscapes and interiors, Charlotte had a fondness for drawing and painting animals. 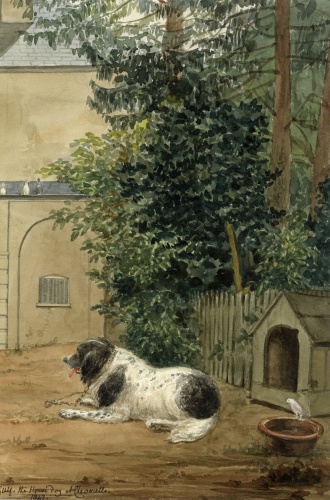 The mid nineteenth century saw the physical and social transformation of Keele village from a rural community to a community serving the needs of the Sneyd estate. This is one of the few surviving Sneyd paintings depicting Keele village life. 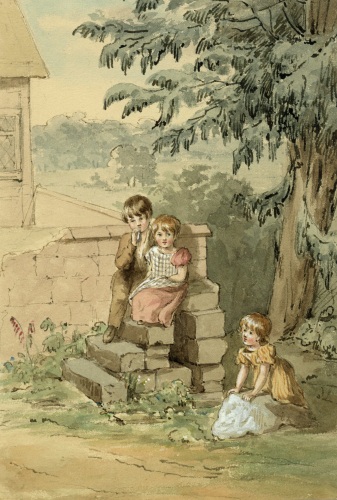 Unlike their brothers, Charlotte and her sisters did not embark on the Grand Tour, but travelled widely over Britain, usually staying at notable residences as welcome house guests. The Sneyds participated in renowned gatherings at Almack’s Assembly Rooms, a social club in London. Between 1819 and 1820, Charlotte painted an imaginary event at Almack’s, depicting almost 200 people in a panoramic watercolour spanning more than two metres, accompanied by a numbered key.

The Duke of Wellington, who was once refused entry for being improperly dressed, can be seen at number 75, whilst Charlotte’s sisters Harriet and Fanny, chaperoned by their mother, are depicted at numbers 50 and 52. 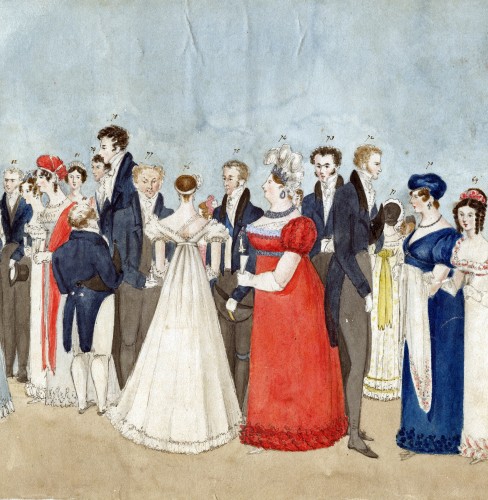 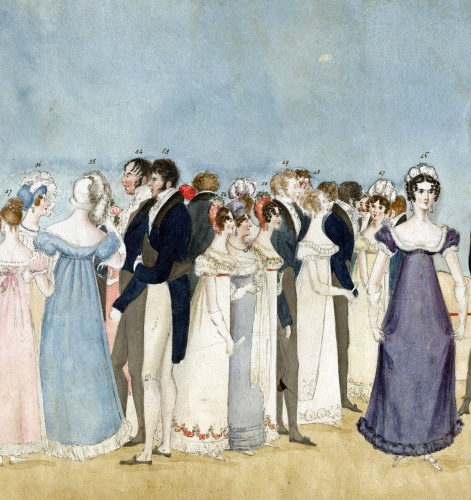 An important addition to the Archives is a recently discovered illustrated manuscript produced by Charlotte in middle age. This charming manuscript comprises fourteen original pen and ink drawings, offering a satiric view of gender roles in Victorian England in the form of a prospectus of English grammar.

Tenses of verbs are illustrated by scenes of social aspiration and disaster, with many of the drawings following an unmarried middle-aged woman’s thoughts as she contemplates who she was, is, and will be - no doubt based on Charlotte herself. 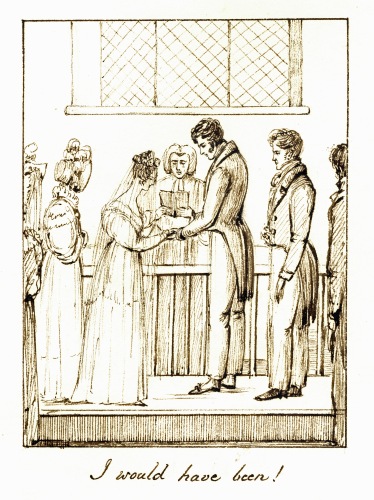 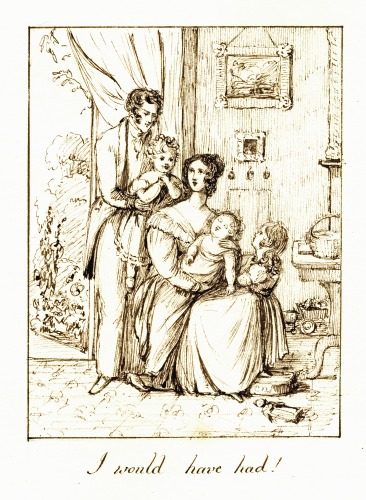 Drawings from Illustrations of the Auxillary [sic] Verbs To Be and To Have; Being a Prospectus of an English Grammar on an Entirely New System, by Charlotte Augusta Sneyd, c.1845 [SP 26]

Charlotte did not marry and lived alongside her two unmarried sisters, Harriet and Elizabeth.
By the age of 27, Charlotte displays a degree of sadness at her situation (as well as hope that she may yet meet a suitor) when she saves a lock of her hair, curled and tied with a pink silk ribbon and preserved in a paper wrapper inscribed “my own hair in case anybody should ever wish for any of it”.

The giving and keeping of locks of hair as enduring tokens of love and affection (or as treasured mementos of the deceased) was common throughout the nineteenth century. 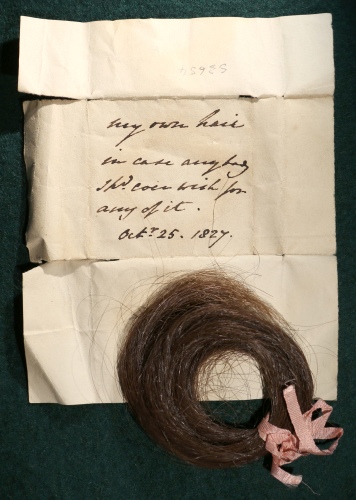 Charlotte Augusta Sneyd died on 19th February 1882, aged 81, and is buried at Keele. Her only surviving brother, the Reverend Walter Sneyd, was heir and executor.

Charlotte’s love of animals is expressed in this letter to Walter, in which she leaves £10 a year to each of her cats “Blackie, Fluffy and Crumplety as long as they live that they may be as well cared for and fed, as they have been in my life time”. 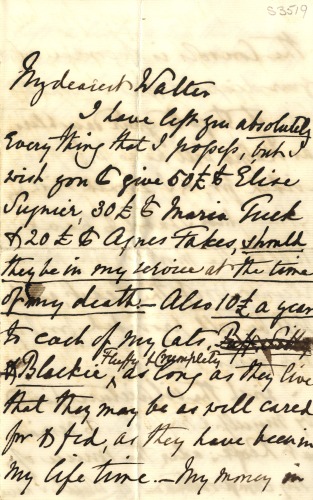