For permission to use and reproduce material from this exhibition, please contact the Special Collections and Archives - email: h.burton@keele.ac.uk or tel: +44 (0)1782 733237. Thank you to Stefan Dickers of Bishopsgate Institute and to John Shapcott for the supply of additional images.

A writer at war

The University Library holds archive material relating to Bennett’s professional and personal life, including original literary manuscripts and a large amount of family correspondence. Keele History student Rob Allan has produced this display on Arnold Bennett's activities during the First World War, contributing to the University's commemoration of the centenary of the war. Rob has researched and digitised original records held in our Archives (and elsewhere) to illustrate Bennett's war-time experiences. 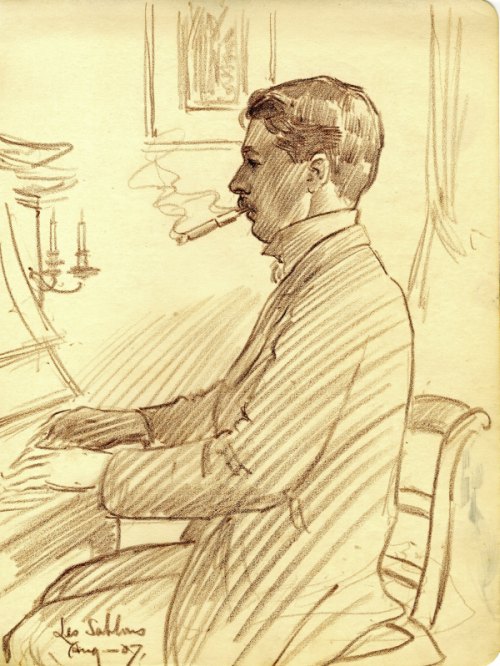 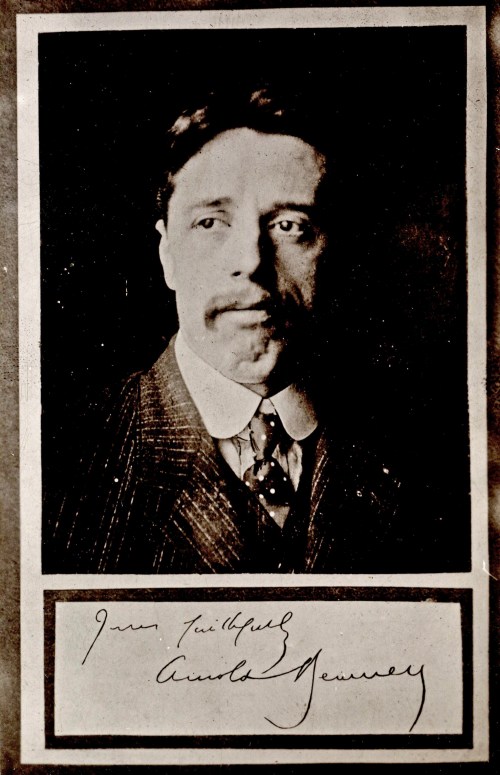 Bennett writes to his sister-in-law about the requests he receives to write for political organizations, and misconceptions about his views on war. He is believed to be pro-peace due to his respect for the work of Norman Angell. Bennett is not opposed to giving up his time to work for his country, but “the war will have to occur” for him to do so. 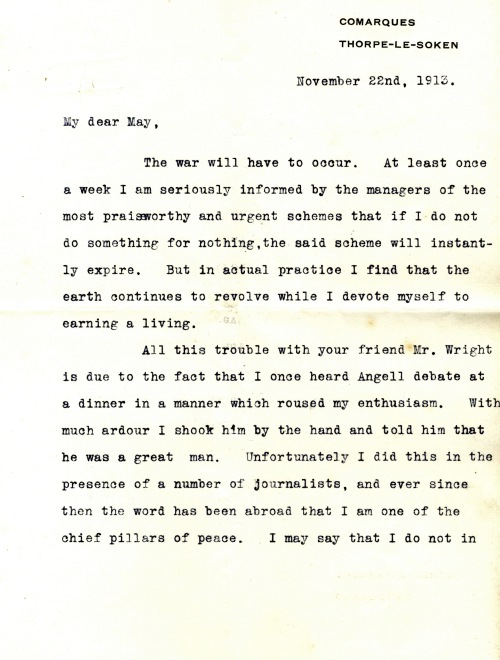 Bennett worked with charitable organisations during the war, using his skills as a writer to promote fundraising events for injured soldiers. Bennett lends his support to the Wounded Allies Relief Committee “Because it is always ready to do anything, because it succours and relieves pain, and because it successfully returns soldiers to the fighting line.” 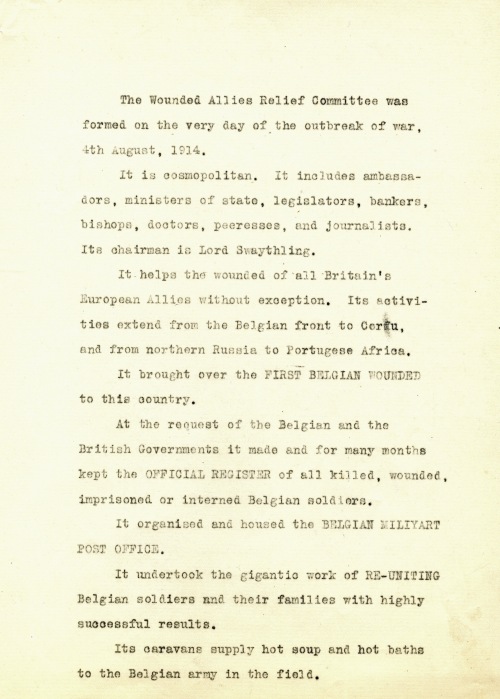 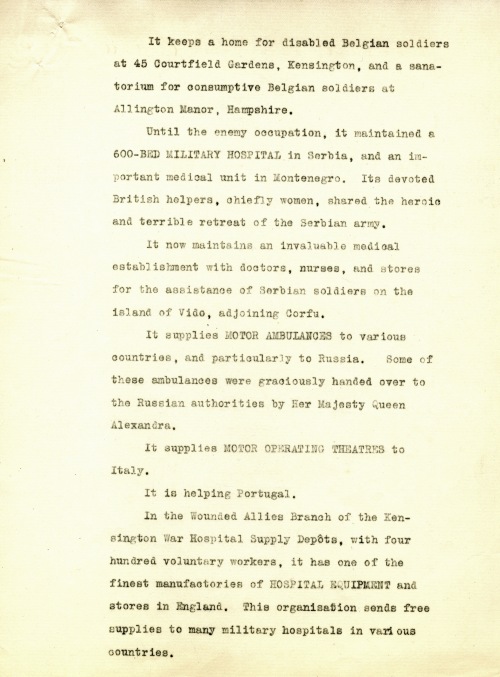 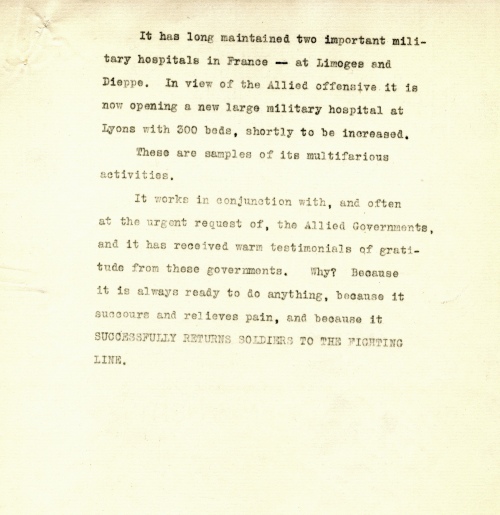 Bennett drafts a letter to King George V, explaining the work of the Wounded Allies Relief Committee, and requesting the King’s appearance at a fundraising event to be held at London’s Caledonian Market.
“They approach your Majesty with the real confidence in that your Majesty has consistently shown a determination to encourage truly democratic enterprises of benevolence”
Unfortunately, the King is not able to attend. 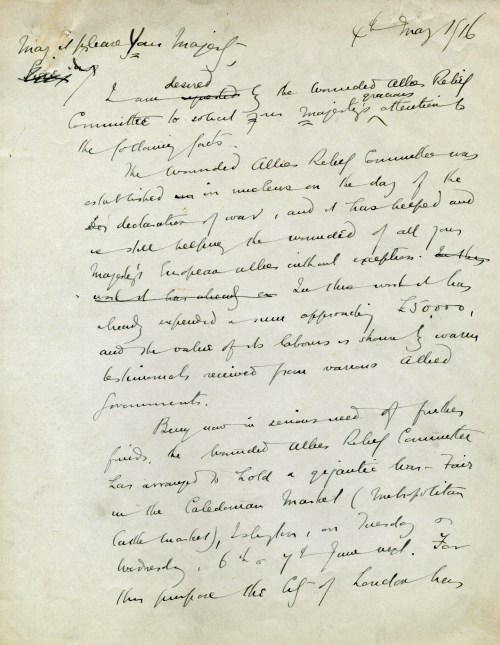 Bennett writes a speech for prominent American actress Doris Keene, delivered at the London Palladium during a benefit concert for the Wounded Allies Relief Committee.

“A Committee may seem to you a very unromantic affair, but as an authority on romance I beg to assert that this Committee is one of the most romantic affairs I ever came across. This Committee sits in a room in Kingsway and hatches a conspiracy to get money out of you. It gets the money; either it worms it out of you, or it holds you up in the street, or it induces you to come to the Palladium. And then the next thing is that this money of yours has been somehow magically translated into soft beds, and nice bandages, and medicines – agreeable or the reverse – and clever doctors and smiling nurses; thousands of poor wounded men are being saved from pain and often from death and their health restored and their spirits restored too. I think that this process is very romantic indeed.” 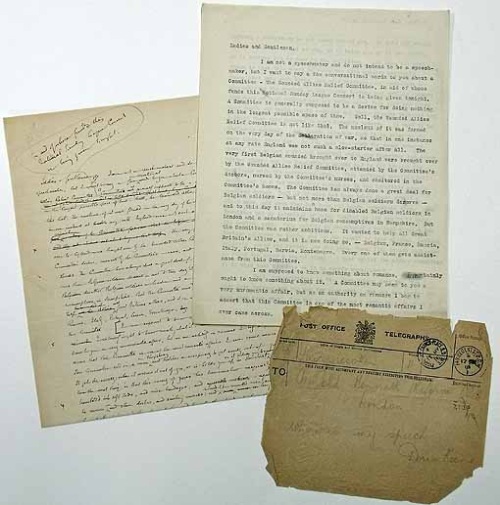 Speech, written by Arnold Bennett for Doris Keene,
including telegram from Doris Keene asking “where is my speech?” 1916 [AB/G7]

The Great War Fair
This fair was held on 6th and 7th June 1916, at the Caledonian Market in Islington, in aid of Belgian refugees and injured servicemen. Working alongside prominent businessmen such as Mr Selfridge, Bennett attracts an estimated 25,000 to 30,000 people to the Market over two days. Using Selfridge’s daily press column, syndicated in several newspapers, Bennett promotes the event and requests donations. 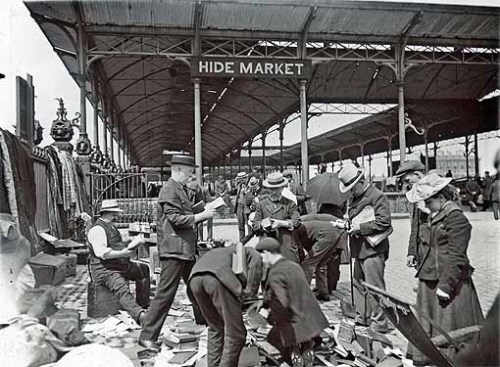 Book sale at the Caledonian Market, 1910 [Courtesy of Bishopsgate Institute]

Bennett writes to his brother about the threat of a German invasion of Britain and his role on the Local Emergency Committee in Thorpe-le-Soken on the Essex coast. "In Essex the military are all on fire preparing for an invasion. The first serious defences against an invasion are now being made. I have no belief in it myself, but the civilian part of the organisation falls on me as War Office representative for over 30 parishes, including about 15 miles of coast." 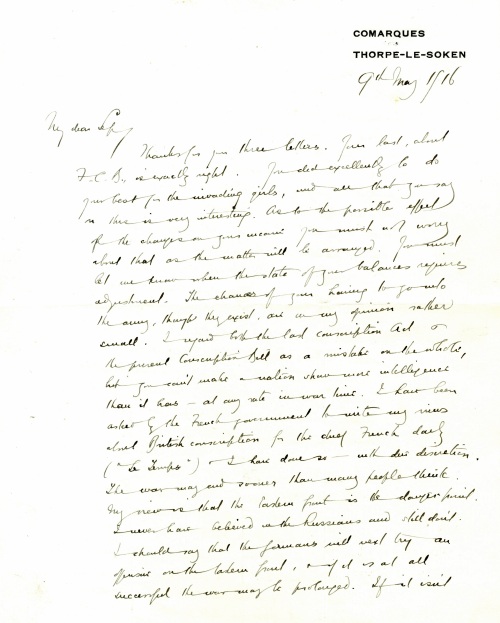 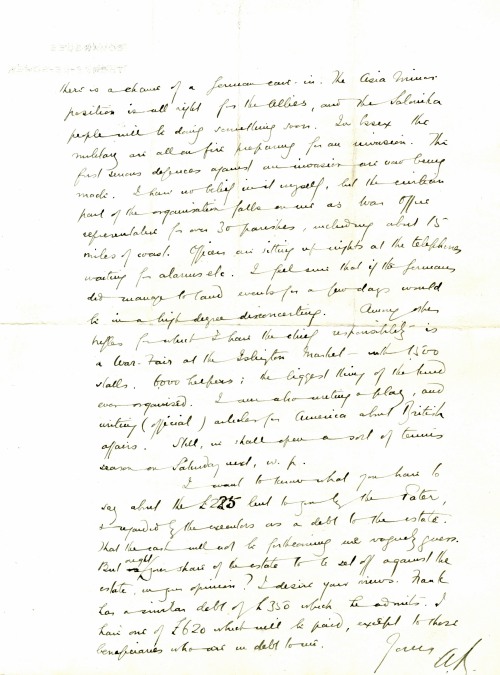 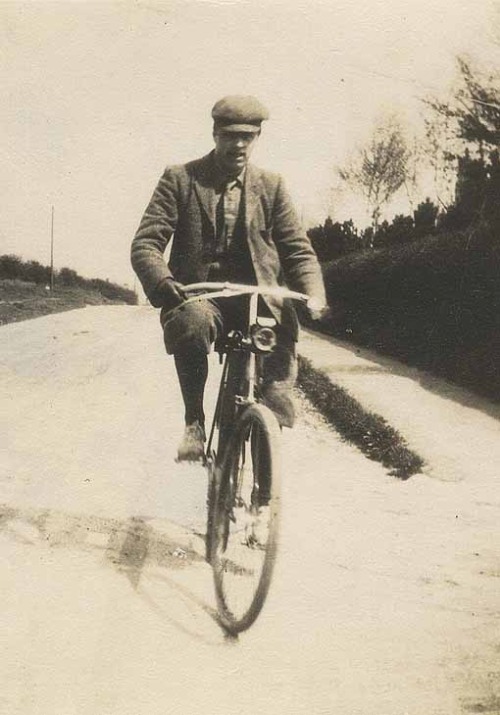 The Ministry of Information

During the war, Bennett worked for a government branch known as the Ministry of Information. Alongside other well-known authors of the period, such as H.G. Wells, Rudyard Kipling and Arthur Conan Doyle, Bennett is tasked with using his talents as an author to create propaganda for the British government. Arnold writes to his brother, Septimus, about his new position at the Ministry of Information. “I have just taken on my new job at the Ministry of Information. It is gigantic. It is also in a thorough mess… You will understand that for me to go back to an office after over 20 years of freedom is a bit thick. However, I enjoy the work, and, although it is much more tie-ing than creative literature, it is vastly less exhausting. I can’t get rid of the idea that in merely seeing people and telling them what to do, I am really not working at all!” 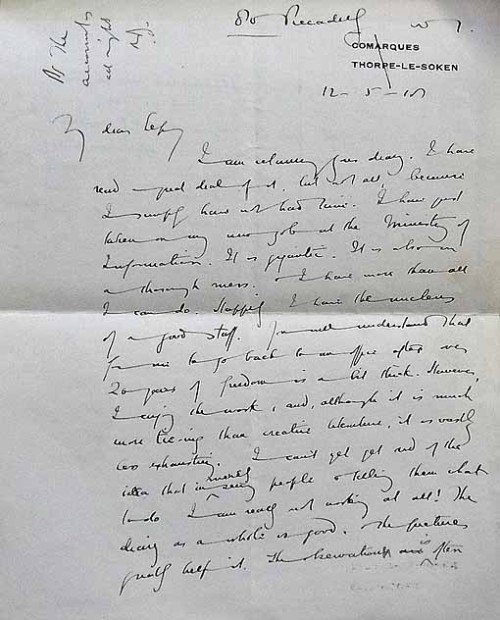 As part of his work at the Ministry of Information, Bennett writes a pamphlet on National Kitchens.
National Kitchens were communal efforts in which food was bought in bulk and then served to citizens, making more efficient use of Britain’s limited food supplies during the war. The concept of sharing meals with other families was not popular with the public, and the similarities to charitable work such as soup kitchens were also unhelpful.

Bennett is tasked with selling the idea to the people. “Britons are too individualistic and too independent to like anything communal. Each wants to be “on his own” … You can trace it in the separate fortified compartments of the British railway carriage and British public-house. And, above all, you can trace it in the proverbial phrase: “The Englishman’s house is his castle”… The British characteristic has its good points, but among its bad points is that it is wasteful.” 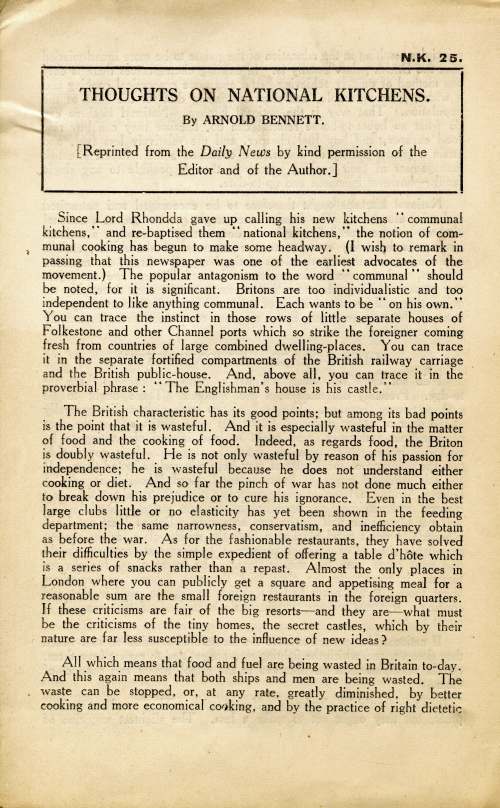 Bennett’s short story ‘The White Feather’ (published in 1914 in the Saturday Westminster Gazette and Collier’s Weekly) is a cautionary tale about the practise of handing white feathers to men who did not enlist. Bennett describes a man enthusiastic to join the army, but forced to decide between joining up and losing his job. Not wishing to impoverish his young family, the man does not enlist, and is then confronted in the street, called a coward and presented with a white feather.

“Yes, the fool – criminally blind to the chances of a European war – had married and become a father”

“He had to choose between his country and his wife and family, and he chose”

The tale demonstrates Bennett’s understanding of the everyday realities of his characters’ lives. 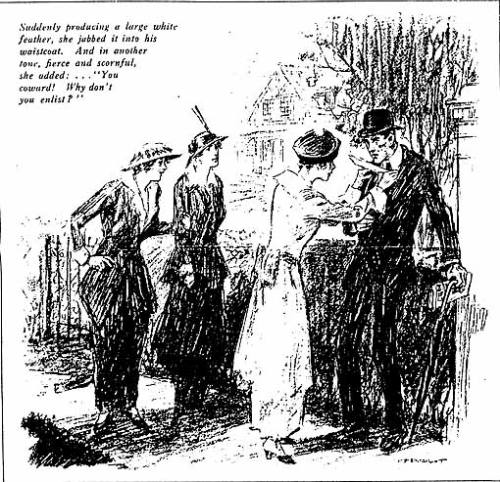