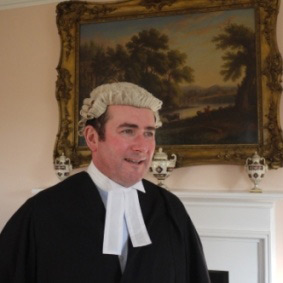 On a personal level I've earned the respect and trust of people from all walks of life by treating them with common humanity. Professionally I have succeeded through the application of good judgement, by retaining a sense of justice and fairness and steering my own course. Oh, and should those who know me well read this, I should also concede that putting down the wrong course code when applying to Keele mixed with a large shot of luck may also have had a contribution.

What has been your biggest achievement so far?
Helping to save the life of a death row prisoner. In the early stages of my career I was asked to consider appeal papers in the case of a Commonwealth convict appealing against his death sentence. I detected a defect in the Government ballistics evidence fatal to it's case and previously unnoticed. The Privy Council overturned the conviction on appeal.

What advice would you give to someone wanting to work in a similar field?
(1) Educate yourself about the herculean task you face. The modern Bar demands entrants to be individuals of the highest calibre. I'm astonished how many students I meet who fail to have an appreciation of the demands they will encounter in practice. Do a mini pupillage (work placement), establish professional contacts and - most important of all - attain the highest degree result you can. Being a member of a profession has rewards but also responsibilities. Being a barrister requires sacrifice in terms of time and effort. So many people enter into the practice of law for the wrong reasons and in a few years realise it's not their dream job as the demands are too great. If you enjoy the job and its challenges you will be successful.
(2) Don't be afraid to be yourself. A successful advocate is most persuasive when there is something of himself in his work.
(3) Listen to your own instincts and form your own judgement. Many others will attempt to influence the decisions you make but it is you who will have to justify those decisions to your client and the bench. Take into account what others say but your best asset should be your own instinct and judgement.

What made you choose Keele University?
The primary draw of Keele was the range of dual disciplinary degrees which were not available elsewhere. My secondary concern was choosing somewhere that I would feel safe and able to express myself. Coming from a fairly small conservative rural Ulster town Keele was the perfect choice for me.

How has Keele influenced your life?
In a fundamental way. Keele gave me the ideal platform to mature - both in terms of intellect and in developing my own personality. I had first rate tutors who encouraged me to express creativity in thinking. That forward thinking approach to legal education was unique and shaped my own approach to my work and life. I was truly happy and content throughout my time at Keele.

What is your favourite memory of Keele?
My first and last days hold equal place. This was the start of my adult life - living away from home for the first time with all the freedom that entailed. My last day was graduation day when I was able to show my mother around Keele for the first time and observe her pride at what had been achieved.  Unfortunately I had lost both my Dad and uncle the year before so this was a very important moment for both of us.

What is your impression of Keele now?
I've gained so much from continuing a relationship with Keele and encourage other alumni to do the same. Anyone who has returned to Keele recently will quickly recognise the vision which has modernised the campus and facilities. Keele Law School educates its undergraduates not only in the discipline of law but orientates them to the modern market for legal services. This has inevitably led to success for both students and the department.

Anything else you would like to add?
I hope that Keele brings the same luck to other alumni old and new. Best wishes in all your endeavours.