The Project - Background and aims 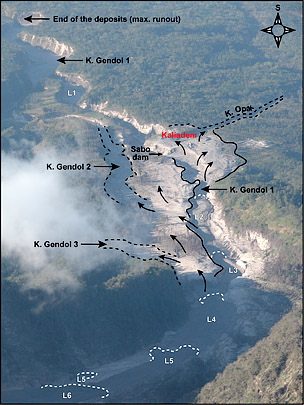 Photograph taken from the summit of Merapi showing the distribution of the June 2006 block-and-ash flow deposits on the volcano’s southern flank. Numbers and white dotted lines correspond to individual lobe deposits. The lobe front of the largest block-and-ash flow on June 14 (end of the deposits) is located at ~7 km from the summit (after Charbonnier & Gertisser, 2008). Aerial Photo Large .

Block-and-ash flows (BAFs) are amongst the most dangerous volcanic phenomena on the planet. Generated by the gravitational or explosive collapses of viscous lava domes or by the collapse of vulcanian-type eruption columns, BAFs are common at many active subduction zone volcanoes, including Colima (Mexico), Unzen (Japan), Soufrière Hills (Montserrat), Arenal (Costa Rica) and Merapi (Indonesia).

Merapi, an andesitic composite volcano located in Central Java (Indonesia), is one of the most frequently erupting volcanoes in Indonesia with nearly persistent volcanic activity (e.g., Voight et al., 2000). Of the 1.1 million people living on the flanks of the volcano, almost half live in high-risk areas from Merapi’s eruptive activity (Thouret et al., 2000).

The 60 or so reported eruptions since the mid-1500s have killed about 7000 people (Simkin & Siebert, 1994). More recently, BAFs killed 66 victims during a small-scale eruption in 1994, whilst the renewed activity of 2006, which, for the first time in more than a century, affected densely populated areas on the volcano’s southern flank led to more fatalities. More importantly, the flows were not confined to the existing river valleys but, instead, spilled over the valley sides and onto the interfluve areas resulting in fatalities in the village of Kaliadem.

These eruptions have illustrated the unpredictable and poorly understood behaviour of BAFs, which caused havoc in areas previously considered relatively safe from such flows. Furthermore, they have demonstrated the urgent need for an improved physical understanding of the mobility, transport and deposition processes of BAFs in order to improve assessments of their local hazard potential. Ultimately, it is vital that areas prone to BAFs and associated hazards are characterised properly, therefore reducing the future risk and its resultant impact on life, property as well as the local economy.

As hazardous conditions prevent close observational studies, assessing the dynamics and depositional processes of BAFs has proven to be extremely difficult. Traditionally, qualitative models of BAF transport and deposition have been developed on the basis of interpretational and observation evidence only. Unfortunately, a combination of poor exposure and rapid lateral facies variations, controlled by unknown palaeo-topography, have often complicated field-based studies and hindered the detailed assessment of emplacement mechanisms. Obviously, without such detailed information, the hazard potential of such flows cannot be accurately assessed.

To overcome the inherent limitations of traditional studies, ground-penetrating radar (GPR) was used to map the internal architecture of the 2006 Merapi deposits as a case study in non-invasive geophysical investigation. The application of GPR to pyroclastic deposits is relatively new and the technique is capable of allowing systematic and rapid collection of sub-surface information independently from the presence of exposures (Russell & Stasiuk, 1997). This approach has provided a unique perspective into the three-dimensional deposit architecture of the 2006 BAF deposits and, more importantly, how these pyroclastic flows were emplaced during the June eruption events.