Although the terrestrial mantle comprises ~80 vol.% of our planet, its compositional architecture is not well understood despite the importance such knowledge holds for constraining Earth's thermal and chemical evolution over ~4.5 billion years of geological time. Our lack of detailed insight into the mantle stems in part from the fact that it is rarely exposed at our planet’s surface, making direct observation and study difficult. It is clear from recent study, however, that the mantle cannot be assumed to be compositionally homogenous or static over geological time. Peridotites from the ocean basins (abyssal peridotites) and from ophiolites preserve evidence for a convecting upper mantle that is chemically and isotopically heterogeneous at regional (100's km) and small (cm-to-m) scales. Complex formation and alteration upper mantle histories involving processes of melt-depletion, refertilisation (whereby originally refractory residues such as harzburgites become lherzolites again via melt addition) and melt-rock reaction have been held responsible, but the causes, timing and distribution of such processes are poorly resolved.

Ophiolites, which represent partially-to-wholly preserved slivers of obducted oceanic mantle, are particularly valuable resources for assessing the timing, causes and extent of mantle heterogeneity, as they allow field-based observation to be coupled with geochemical investigation on otherwise inaccessible mantle material. Furthermore, ophiolites preserve a range of oceanic mantle lithologies (e.g., harzburgites, lherzolite and dunite) and such variation allows detailed assessment of the distribution and relative timing of events acting upon the mantle that is preserved. A distinctive attribute of some ophiolites, which contrasts with abyssal peridotites, is the presence of podiform chromitite seams, typically in the region of the petrological Moho, which are often associated with Platinum-group element mineralization. The timing and genesis of ophiolite podiform chromitites is controversial, but it has been suggested that they represent zones of focused melt channeling in supra-subduction zone settings.

The Shetland (UK) and Leka (Norway) supra-subduction zone ophiolites comprise oceanic lithosphere separated at ~620 Ma on either side of a mid-ocean ridge and subsequently obducted over continental crust ~130 Ma later, each on opposite sides of the northern Iapetus Ocean. A pilot study already carried out on the Shetland ophiolite by the PI and Project Partner reveals that it preserves evidence for a complex sequence of melt depletion, percolation and refertilisation events that occurred over the lifetime of the Iapetus mantle. The critical observation made from the pilot dataset is that later mantle events only partially overprint the compositional heterogeneities developed from earlier mantle processes and that the relatively high degrees of partial melting associated with the supra-subduction zone are very effective at generating such heterogeneity. This important observation will be tested in the proposed research by

In order to achieve this, the powerful combination of the Re-Os isotopic system and highly-siderophile element (Os, Ir, Ru, Rh, Pt, Pd, Re, Au) abundance measurements will be utilised to discriminate between the processes responsible for generating mantle heterogeneities such as melt depletion, refertilisation and melt-rock reaction. Thus, profound insight will be gained into the chemical evolution of a piece of oceanic mantle and the development of compositional heterogeneity therein, from outcrop to oceanic plate scales, over much of the lifetime of the Iapetus Ocean. 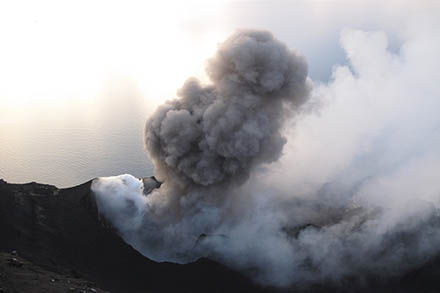 The project investigates the large volcanic explosion or “paroxysm” of Stromboli volcano in Southern Italy on 3 July 2019, which produced a ~ 4 km high ash column and caused one fatality.

Such paroxysms, which previously occurred in 2003 and 2007, infrequently interrupt the volcano’s persistent “normal” Strombolian activity which attracts large numbers of tourists to the island each year.

Stromboli’s paroxysms are often preceded by little to no warning signs, which makes them extremely dangerous. The eruptive behaviour in 2019 also appeared to be different from earlier paroxysms, as it was not preceded by lava effusion, previously interpreted to be a possible precursor sign to a large volcanic explosion.

An integrated, state-of-the-art petrological approach is used to yield new insights into the pre- and syn-eruptive magma plumbing system and the processes leading up to the 3 July 2019 paroxysm at Stromboli.