In the Spring of 2012 the approval was given for an allotments scheme on the University campus.  Discussions had been underway about such a scheme for some time and the University’s Executive Committee recognised that it fits well with Keele’s Strategic Plan commitment to ‘develop an environmentally aware and sustainable outward facing campus community’.  More specifically, there is a commitment in the University’s Environmental Policy to ‘support the development of staff and student allotments to promote engagement with local food and the food life cycle’. 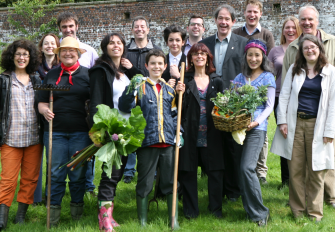 The first allotment holders with the University’s Chancellor Jonathon Porritt

The site has been developed in the Walled Garden on campus.  Historically, this area was used to grow food for the Sneyd family (the landowners at the time and resident in Keele Hall in the 19th Century), and, more recently, to grow plants for commercial purposes.

The site was originally carefully selected and designed for optimal growing conditions.  However, since foundations were laid to allow the construction of greenhouses against the high back wall, it was determined that the most effective way of using the area was to create a series of raised beds. 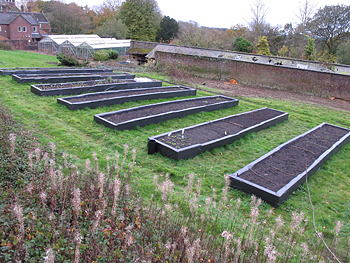 Construction took place over the Summer 2012  – in spite of driving rain which at one stage left the site looking like a bog!  However, there are now 11 raised beds in place, nine of which are tended by a group of allotments holders who are staff members, students and local community members.

The allotments are overseen by an allotment management group who meet regularly to manage the scheme and discuss day to day practicalities.  If you would like to find out more about the scheme or get on the waiting list for a bed, please contact Dalit Fischman at dalit.fischman@gmail.com.