I graduated with a BSc (Hons) in Biochemistry and Applied Molecular Biology from the University of Manchester Institute of Science and Technology (UMIST) before going on to complete a PhD at the University of Edinburgh investigating the DNA replication machinery of the human malarial parasite Plasmodium falciparum. Between 1996 and 1998, I worked at the University of Würzburg in Germany where I started to become interested in understanding stage-specific gene regulation in P. falciparum as well as a molecular investigation of parasite’s virulence factor PfEMP1. In 1998 I returned to the UK to the Weatherall Institute of Molecular Medicine, University of Oxford, where I worked with Prof. Newbold on the Malaria Genome Project and the antigenic switching and cytoadhesive properties of PfEMP1. Between 2003 and 2005 I was located at at the Liverpool School of Tropical Medicine before moving to the Institute for Science and Technology at Keele University on a Royal Society Relocation Fellowship. In 2006 I was appointed a Lecturer in the School of Medicine and became involved in the development and delivery of a new MBChB curriculum. I have since had the role of colead for year 1 (Challenges to Health) and am currently year 4 colead (Advanced Clinical Experience). In 2009 I received a BBSRC New Investigator Award and was promoted to Senior Lecturer. I have been an ordinary member of council for the British Society of Parasitology (2009-2012) and Keele University Senate (2010-13), and am on the editorial board for Case Reports in Infectious Disease, ISRN Tropical Medicine and Malaria Research and Treatment

I lead one of the six research groups within the Institute for Science and Technology in Medicine that study the biology of the human malarial parasite P. falciparum, its pathogenesis and transmission by the mosquito vector. My work is focussed on the biology of the malarial parasite – and in particular the intraerythrocytic stages on infection in the human host, the principle developmental stages responsible for the pathology of disease.

My research addresses the following areas;

Control of gene expression during intraerythroctyic development is controlled though a variety of molecular mechanisms operating at the epigenetic and genetic levels (Horrocks et al. 2009). Our research interests focus on how these operate to regulate the absolute and temporal programme of expression of house-keeping genes. We employ the use of cell culture, laboratory and bioinformatics techniques to help us better understand their interplay.

We have also modelled the spatio-temporal organisation of the large transcriptional units in P. falciparum to better understand how large transcripts are arrayed over the relatively compact genome (Russell et al., 2013). This not only provides some interesting insights into the selective pressures on the parasite’s genome, but has also been extended to facilitate a comparative analysis of intergenic space organisation in other Apicomplexan parasites that are important for both human and veterinarian health. The nature of the sequences in these intergenic regions have also been explored – and show some interesting features of spatial organisation around key landmarks for gene expression.

More recently, we have been exploring the application of bioluminescence as a tool to monitor various aspects of antimalarial drug activity (Hasenkamp et al., 2013). Comparison against fluorescence assays reveal the two assays share similar profiles, however, bioluminescence may offer attractive opportunities in the development of rate-of-kill and lethal dose estimations. 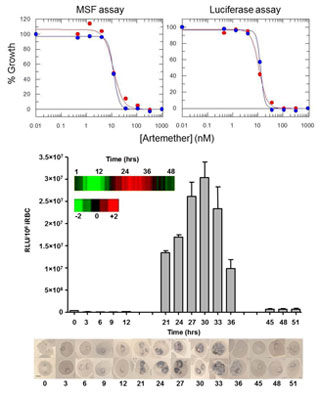 There is an urgent demand to explore the potential of novel classes of drugs for their potential as new leads for antimalarial development. My laboratory collaborates with colleagues at Keele and Nottingham Trent University in an exploration of the structure activity relationship for synthetic monoindole alkaloids (Horrocks et al., 2012) and chemically modified glycosaminoglycans. The latter, are particularly attractive as their putative mode of action during the inhibition of erythrocyte invasion may be exploited to explore similar invasion blocking activity for a range of Apicomplexan parasites.

Our laboratory collaborates closely with other members of Keele University (Life Sciences and Chemistry), nationally with Nottingham Trent University and Charnwood Molecular Ltd and internationally with colleagues at the Universities of Massachussetts at Lowell and California at Riverside. The lab currently has one PhD student (Mr Imran Ullah), one MPhil student (Ms Haddi Mbye) and currently at any time between 1-4 undergraduate students. 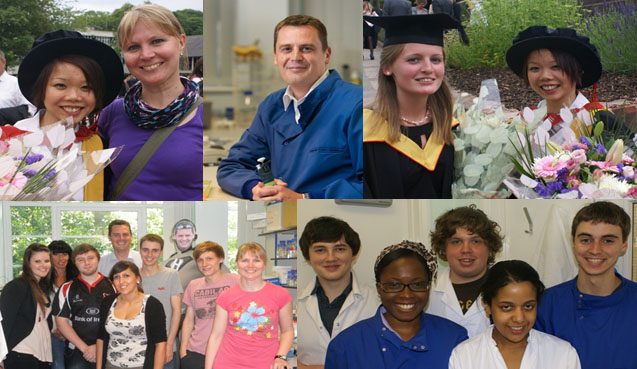 If you are interested in exploring opportunities to join my research laboratory, please contact me at p.d.horrocks@keele.ac.uk.

My primary teaching and learning role is delivered through the coleadership of the year 4 cohort in the School of Medicine. Year 4 students are located in a variety of healthcare providers throughout Staffordshire and Shropshire. I have extensive experience as a PBL tutor in the pre-clinical years 1 and 2 of Medicine.

I provide undergraduate projects (experimental and non-experimental) as well as honours essay titles for the School of Life Sciences. Here I also contribute to the delivery of the MSc in Molecular Parasitology and Vector Control in conjunction with partners at Manchester and Salford Universities.

I welcome applications from students who wish to undertake PhD or MPhil postgraduate studies in my team. Former, and current, postgraduate students include UK nationals as well as overseas students from South Asia, the Middle East and West Africa, undertaking both full-time and part-time studies in my laboratory. Interested students can contact me directly on p.d.horrocks@keele.ac.uk to discuss potential projects as well as the application process for these degrees.

My current research interests are as indicated on the "Research and Scholarship" tab.  Previous postgraduate students have submitted theses (and published their work) on topics as diverse as the molecular mechanisms that control gene expression in the human malarial parasite, a comparative investigation of intergenic regions in apicomplexan parasites to structure activity relationship studies of pyrazoline drugs against malarial and leishmanial parasites.

Currently, we have students developing novel antimalarial drug assays, investigations of cell biology following lethal doses of antimalarial drug treatment and the screening of antiparasitic and antimicrobial agents from libraries of natural products (a collaboration with a UK Industrial Biotechnology partner).

My team works closely with those of other investigators interested in parasite biology as part of the Centre for Applied Entomology and Parasitology (CAEP) providing a stimulating collegiate environment for postgraduate research students, regular contact with your supervisory team and access to modern research facilities.