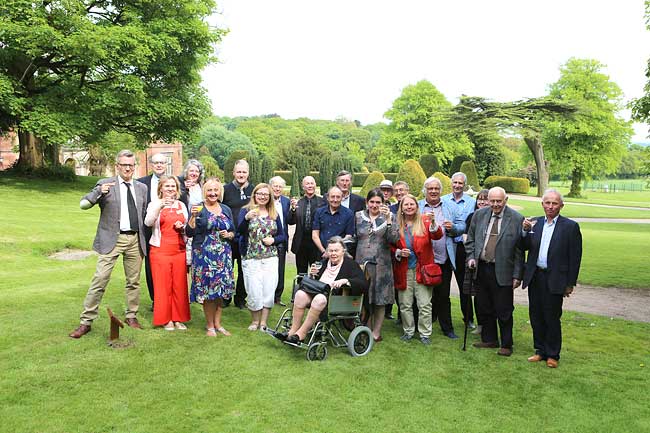 A Willow-leaved Oak was planted by Keele Hall in his memory on 18th May 2018 by friends, colleagues and by his aunt Mrs Ann Davies and his cousin Penny Davies. A plaque reads "In Memory of ANTHONY PHILLIPS 1944-2017, Reader in Historical Geography"

Tony, as he was universally known, rarely strayed far from the borders of Staffordshire and Cheshire. After his early life in the south of Manchester he went to University College London where he took a degree in Geography and embarked upon the research in Historical Geography that was to sustain him for the whole of his professional life. This soon brought him back to the local area when he was appointed to a lectureship at Keele in 1968 where his research increasingly focused upon agricultural history and the history of cartography.

A wealth of publications, a Ph.D and a Readership at Keele all followed during the next five decades as Tony pursued his interests in record offices, map libraries and estate archives. His research led him into productive collaborations with colleagues both at Keele and elsewhere, across both Geography and History. He edited the North Staffs Journal of Field Studies from 1970-79, was one of the first members of the Historical Geography Research Group, and was the originator and contributor to the joint annual seminars with The British Agricultural History Society from the mid-1970s. His teaching covered many aspects of geography both in the classroom and in the field, and it was always marked by a wide-ranging knowledge and an approachable style. His courses in Historical Geography were the focus of his enthusiasm and these regularly attracted dedicated and highly committed groups of students. Tony made no secret of the fact that departmental administration was not a major priority but he ably took his turn as Head of the Geography Department in 1994 and subsequently helped to guide a number of structural changes and new appointments as the enlarged School of Geography, Geology and the Environment emerged. After retirement in 2010 Tony continued to contribute to the life of the School through a small teaching role, a large social role and, with the luxury of more free time, through a continuing research programme. His life had always been firmly grounded in the local area so it is fitting that this period of his career matured in two outstanding jointly authored publications in the form of Historical Atlases of Staffordshire and Cheshire.

Tony was dedicated to scholarship; he was true to himself and typically side-stepped passing academic fads. He immersed himself in serious historical documents but outside of his research he was outgoing, gregarious, ebullient and had a great sense of fun. He enjoyed life and generously scattered this sense of enjoyment around him. He took a great interest in the lives of colleagues, but at the same time was immensely guarded and private about his own life, relishing the remoteness of his rural cottage at Macefen near Whitchurch. He was a man of catholic interests, ranging from high-brow classical music to the popular culture of Port Vale FC, classic films and old radio and TV comedies and he was equally knowledgeable about all of them.