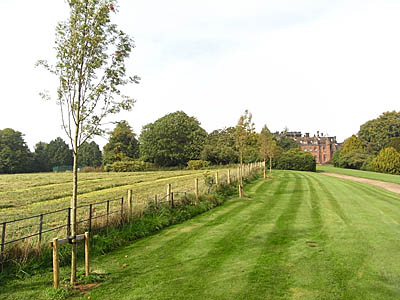 Five ornamental Rowans have been planted at the bottom of Keele Hall lawn by Prof. Philip Davies in memory of his wife.

Philip and his wife met at Keele, he was doing American Studies and she Russian. He wanted trees that would span the two continents. Rowan was chosen as it grows right through Russia and is also a common, introduced ornamental tree in North America (and indeed is naturalised in parts and spreading through the native woodland).

Moreover it is very similar to the American Mountain Ash Sorbus americana - which doesn’t grow wonderfully in the UK - and an American and a Russian looking at a rowan would both immediately feel at home with it. The five will form a varied and very attractive addition to the campus.