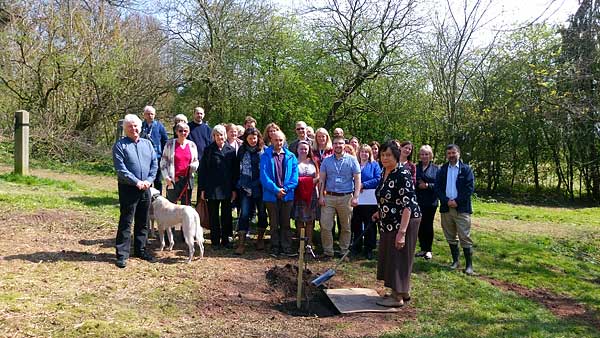 Three trees were planted on 15th April 2016 by Richard's wife Mary in his memory in the Memorial Garden. They include an Apple Malus 'Sunset', Apple Malus 'Kidds Orange Red' and a Bean Tree Catalpa bignonoides 'Aurea'. Mary is seen here with Richard's friends and colleagues from the School of Life Sciences.

The following appeared on the Centre for Applied Entomology and Parasitology website.

Richard had been ill for many years but his death at home on 26 October 2015 was a shock to many at Keele, in particular to staff and students in the School of Life Sciences.

Richard grew up in Battersea, South London and after a first degree at London University, he spent two years on Voluntary Service Overseas working at the Mosquito Research and Control Unit in the Cayman Islands, West Indies.

He was appointed as Entomologist at the Wellcome Trust Parasitology Research Unit in Belem, Brazil where he developed his passion for sand flies and the transmission of different forms of human leishmaniasis. His pioneering work on the colonisation and artificial feeding of the sand fly Lutzomyia longipalpis led to the first experimental transmission of Leishmania infantum, work that was published in Nature.

He returned to the UK in 1977 and joined the Liverpool School of Tropical Medicine for 16 years firstly as an Overseas Development Agency Lecturer and then as a Wellcome Senior Lecturer and Reader. During his time at LSTM he pioneered many new areas of sand fly biology and in particular he continued his interest in Lutzomyia longipalpis, the Brazilian vector of human and canine visceral leishmaniasis. He demonstrated the importance of the interaction between host odour and sex pheromone which formed the foundation of new control strategies for sand flies. In 1994 he was appointed as Professor of Medical Entomology at Keele University.

During his 21 years in the School of Life Sciences, Richard was a role model to so many students and believed that, like him, they should be given the opportunity to encounter biology internationally. He instigated the 'Malaysian Experience', which gives Life Science students the opportunity to undertake research work in Penang. Life Sciences will not only remember an eminent scientist, but a true gentlemen, whose smile and friendship will be greatly missed.