A Maidenhair Tree Ginkgo biloba planted by his wife Pat Buckmaster nee Fidler (class of 1963) in the Memorial Garden in 2015. Pat was unable to attend the planting. 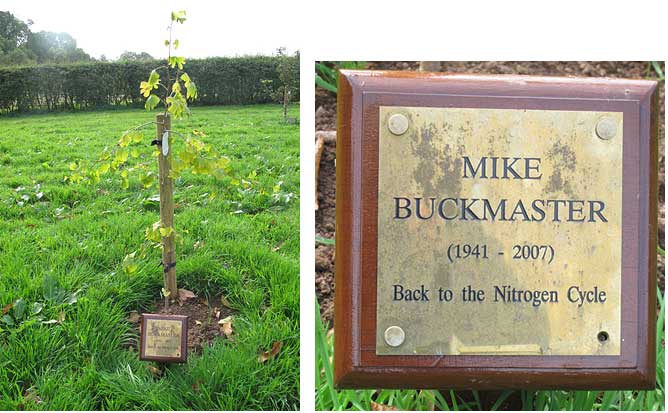 "Mike Buckmaster succumbed to the cancer which he had lived with and fought with his usual good humour and resilience for a year or so. He died in November, leaving Pat (nee Fidler - Geology and Geography) his wife of 44 years, a daughter, Clare and an adopted son, Mark.

Tony and Jill Budd represented his many Keele friends by attending his memorial on 30th November in his home town of Newbold Verdon in Leicestershire. The hall was crowded with friends and relatives. Mike had planned this memorial and Pat led it, reading extracts from his diary, playing his favourite music and inviting friends, teaching colleagues and family to speak. In spite of his too-short life, Mike had packed plenty in, especially as far as his and Pat's consuming passion was concerned - travelling to and around some of the more remote parts of the world. He and Pat had taught in Nigeria in the mid '60's, with Mike coming close to being executed by one or other of the opposing factions in the Biafran war, and by contrast had later spent a year teaching in Denver on an exchange programme. They (with Clare and Mark when they were younger) had travelled extensively - in among other places - the States, Africa and the Middle East: always the hard way (no 5-star luxury for Mike) and discovering the most out-of-the-way places and people. Mike had a gift of instant rapport with everybody he met and was a fund of funny, heart-warming and always enthralling anecdotes."