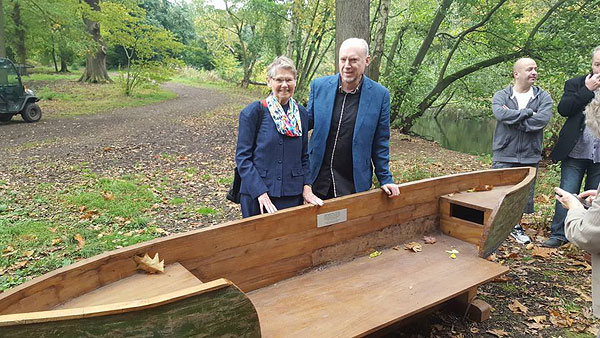 Mark's contribution to Keele is commemorated by a mulberry tree in the Memorial garden, a bench in the shape of a Balinese canoe by the lakeside, and a plaque in the Students' Union. Over thirty Keele alumni and staff members joined Mark's family and friends on 14th October 2017 to remember Sparky's twenty-seven years as a student (1989-1993), Students' Union colleague and "all-round social instigator". The memorial fund and design of the canoe-bench were led by Keele graduate Nick Brace, Class of 1993. Seen here with Mother Rosemary and Brother Elliott.

‌The inscription on the bench:

Student, Resident Tutor, Marketing Manager, Horwood Quizmaster, Keele Yearbook Editor
and KUSU Pool Tournament Instigator... He was a Renaissance Man. Loved and missed but forever remembered with a smile by his many friends 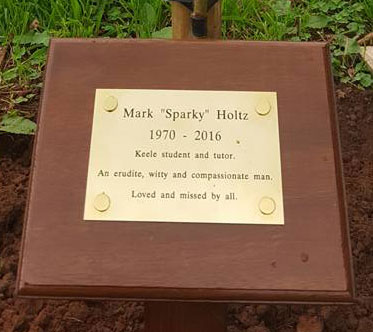 ‌The mulberry tree in the Memorial Garden has a plaque inscribed

Mark 'Sparky' Holtz 1970-2016, Keele student and tutor. An erudite, witty and compassionate man. Loved and missed by all

Mark 'Sparky' Holtz 1970-2016 Colleague and friend of Keele Students' Union which was enriched by his wit, creativity and compassion. Remembered for his abiding belief in the goodness of others, and for the laughter that he brought to the lies of those around him.