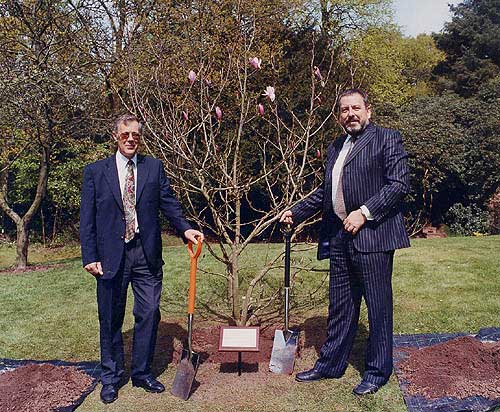 A special memorial service was held in the University Chapel for John Hodgkinson, OBE, DUniv, first registrar of Keele University, who died earlier this year. It was attended by family, close family friends, former colleagues and representatives from the University, including the Vice-Chancellor and Simon Morris, University Secretary and Registrar. The service was preceded by a ceremony at Firs Hill to plant a Magnolia liliflora in memory of John, which was led by Simon Morris and Simon Hodgkinson, eldest son of John and Dorothy Hodgkinson.

John Hodgkinson came to Keele in 1953 as Registrar of the University College of North Staffordshire before the graduation of the first intake and when there were just 600 students. Over the next 29 years he went on to guide and advise many Principals, Acting Principals and Vice-Chancellors and by his retirement in 1982 the University had 2,800 students. Following his retirement he became Registrar Emeritus. In the New Year's Honours List of 1977 John was awarded the OBE in recognition of his services to Keele and to higher education in the UK. In 1983 Keele recognised his service to the University with the award of the Honorary Degree of Doctor of the University, citing his unparalleled contribution to the making of Keele.John and his wife Dorothy, who died last year, were active members of the Keele community, resident for most of his time as Registrar at Firs Hill on campus and contributing between them to almost the whole range of the University's activities.