A Flowering Cherry Prunus 'Sunset Boulevard' from the National Collection in the Memorial Garden was planted by her husband Ken (Keele 1966-1970 Psychology & Physics and 1975 PhD Communication). A plaque reads "In loving memory of Jo Beverley who became one with the Universe on May 23rd 2016; Aged 68 years." 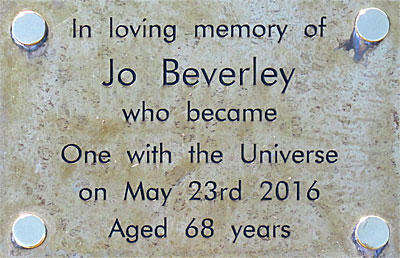 Jo was a proud Canadian and an English author of historical romances. "One of the great names of the genre." Romantic according to the Times. Jo said, "I have been called ...today's most skilful writer of intelligent historical romance..." by Publishers Weekly and my books have been described as "Sublime!" by Booklist. I have five RITA awards, the top award in romance, most recently for Devilish I'm also a member of the Romance Writers of America Hall of Fame and Honor Roll. Five RITA awards from the Romance Writers of America and awards from Romantic Times including two Career Achievement awards. She is a member of the RWA Honor Roll, and the RWA Hall of Fame.

Ken says, "We both graduated from Keele in 1970 and married in 1971. I completed my PhD from the Department of Communication in 1975. We emigrated to Canada in 1976 and lived there until we moved back to the UK in 2009. After Jo's passing, Ken plans to return to Vancouver Island, nearer his family." Ken left a gift of five of Jo's books for the University Library.