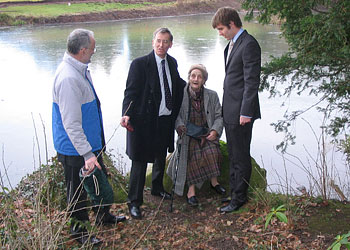 The planting took place on Saturday 3 Jan 2009, by the side of the top lake, of a Pedunculate Oak in memory of the Eric Williams. Eric came to Keele in 1950 he worked in the Estates & Buildings Department as an engineer before retiring 1982.

Eric's wife also worked at Keele Hall as a cook and then later as playgroup teacher during the same period and his family grew up on campus living in Drive Lodge. His three sons arranged the planting ceremony.