A Flowering Cherry Prunus x yedoensis 'Caroline' was planted in his memory on 10th July 2015 in the Memorial Garden by his son and daughter. 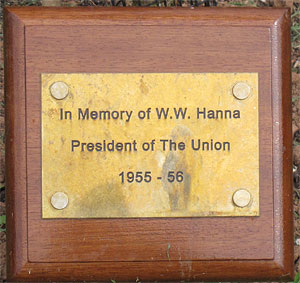 William W Hanna - usually known as Bill Hanna - had a working life with ICI, Beechams,G.B.Brittons, Unigate, ending as Director of Management and Organisation Development at the CAA. He also worked closely with Ashridge, Insead and Henley Management Colleges

Having served with the Somerset Light Infantry in Germany and Malaya he transferred to the Territorial Army and later became Chairman of the Light Infantry Association in Somerset and served on the ABF committee for Somerset.

At Keele he played cricket and rugby ( captain in his final year ) for the Univ.and was Secretary of the Athletic Union in 1954 then President of the Union in 1955-56. He kept his ties with Keele, serving on the Keele Society Committee and becoming Chairman for a while.

In Bath he was a school governor and President of his Old Boys Association. Having read Hist/Politics at Keele he returned to them ( especially military history) in retirement with involvement in the Hist of Bath Research Group, as Field Worker for the National Inventory of War Memorials and by lecturing and writing.