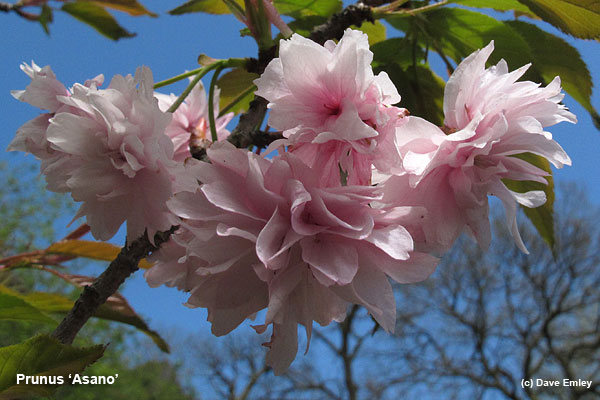 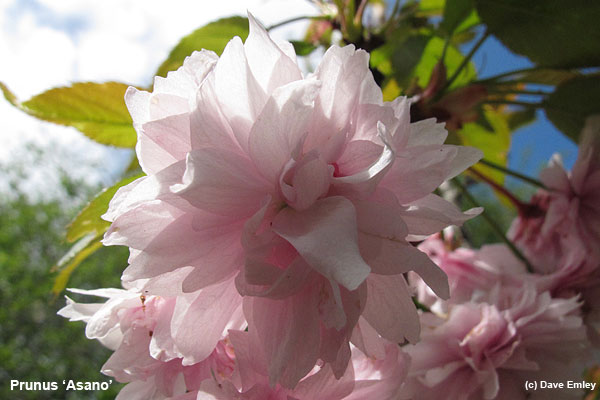 One of the chrysanthemum-flowered varieties. It was introduced in 1929 from Japan by Collingwood Ingram who regarded it as one of his finest introductions. It is named after the central figure of the historical tragedy of the 47 Ronins, the Japanese warrior Naganori Asano (1665-1701), famous for committing hari kari by ripping his abdomen after a confrontation at court. His 47 followers exacted revenge and had to commit suicide in similar fashion. Ingram considered it an upright and much more vigorous counterpart of ‘Kiku-shidare-zakura’ (Cheals Weeping, Prunus serrulata 'Rosea' Wilson), whose flowers and leaves are very similar.

It forms a small somewhat narrow vase-shaped tree to c. 6m high which flowers profusely in late April – early May, c. 2 weeks earlier than ‘Kiku-shidare-zakura’. Chrysanthemum flowers of deep rose-pink of a rather mauve shade, containing c.100 closely packed pointed petals, are very freely produced in short stemmed corymbose inflorescences of 2-6 flowers some 4 cm across which look like paper flowers. Young leaves are very lanceolate in shape and, when young, of a bronzy-green shade. Kuitert considers that it must be related to ‘Taizan-fukin’.